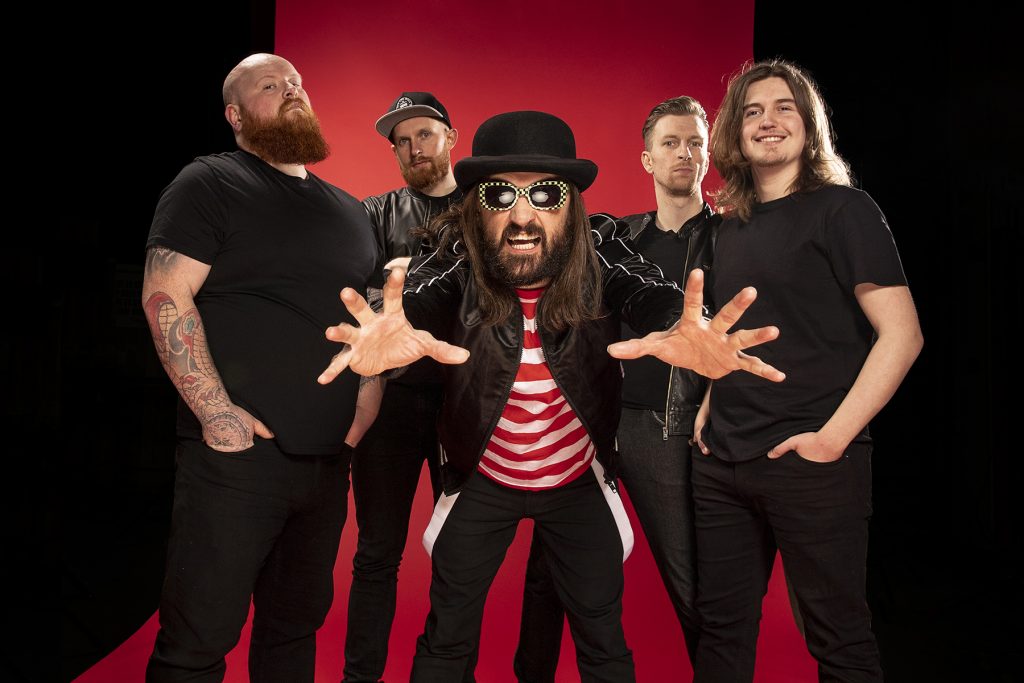 Ahead of their highly anticipated new album House Of Noise, set for release on 17thJuly 2020 via Earache, Lancaster rockers Massive Wagons are excited to announce the release of their second singleBangin In Your Stereo. The single is accompanied by a sublime stop-motion Lego video, which features Massive Wagons, alongside the likes of: Noddy Holder, Superman, Darth Vader, R2DT and the Genie from Aladdin… amongst others.

With Bangin In Your Stereo Massive Wagons crafted the perfect rock banger: in just under three minutes the song will stick to you and will keep on growing with every listen. The band’s recipe calls for the right balance between: huge chorus, catchy riffs, intricate solo, contagious rhythm and energetic vocals.

Front-man Barry Mills comments: ‘Bangin was one of the last tracks we wrote for the album, we were playing through all the other tracks on a regular basis in practice and just realised what the album was missing, it was this song!! A big old riffing rock n roller, big statement in your face kinda song, loud, ballsy, catchy as hell and under 3 mins haha, it’s a party track, goes down ace live and is really fun to perform, I love the dual guitar riff off at the start, left and right bang bang like a boxer, then BOOOM one up the middle, floored!’

Following the chart-busting Full Nelson, a UK Top 20 hit in 2018, House Of Noiseis the band’s fifth studio album and easily their most accomplished work to date. The record brings together all of the infectious elements that have endeared Massive Wagons to fans of maximum force rock n’ roll – a raucous rabble-rousing sense of community, straight from-the-heart lyrics, and an irresistible combination of pop melody and street-smart hooks. The album contains 12 tracks that vary from the high octane opener In It Together, to the anthemic title track and the frankly ludicrous, but hilarious, TheCurry Song,via the brooding menace of Heroand bittersweet lament of Sad, Sad Song.  The entire experience overflows with personality and passion, and sounds like nothing else. Massive Wagons have just kicked things up another notch……and then some!.

Massive Wagons is also excited to announce the launch of Wagons World: the band’s inner circle, an assemblage of first class rock n’ rollers dedicated to good times and to create a community built around the love of music. Wagons World is based on the Patreon platform and will allow you to become a patron and support the band and their creative output. You can find out more here – https://www.patreon.com/wagonsworld

New albumHouse Of Noise will be released on 17thJuly 2020, via Earache Records.
Pre-orders are available here: earache.com/wagons
Become a patron and join the Wagons World here: https://www.patreon.com/wagonsworld