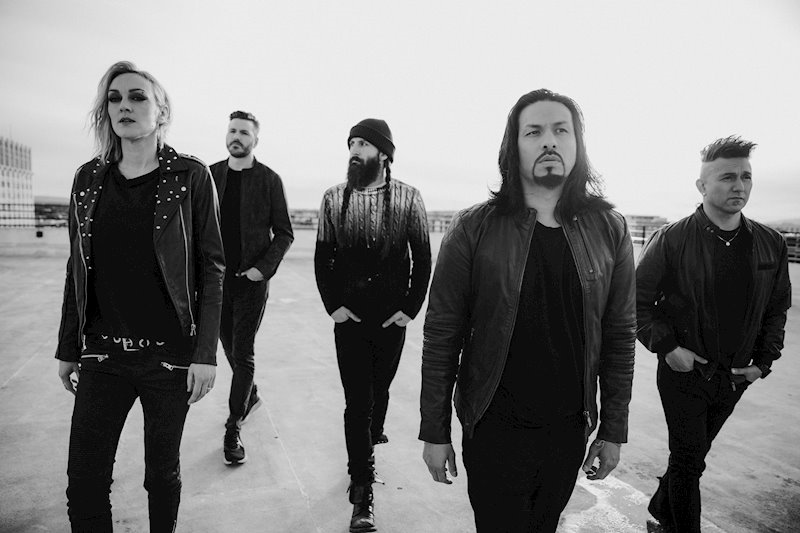 POP EVIL is the bridge between life-affirming hard rock hit-making and the burgeoning new frontier of genre-bending postmodern playlists.

A crowd-pleasing band unafraid to embrace the heaviest and most melodic ends of the spectrum, with a seemingly endless stream of No. 1 hits veering between fist-pumping anthems and timeless power ballads. POP EVIL delivers their most ambitious rebirth yet with a jaw-dropping sixth album.

“Let the Chaos Reign” and “Work” arrive as a twin assault of invigorating readymade hits for 2020, from an album filled to the brim with a dozen tracks each worthy of a dedicated spotlight. “Let the Chaos Reign” is the heaviest single the band has ever dropped, a rousing fight song of self-determination and rising to meet any challenge with courage and strength. By contrast, “Work” puts its heavy guitars atop grooving rhythmic punch, and EDM flourishes, as it champions the working-class heroes struggling to persevere across all industries today.

Pop Evil has been a staple at major festivals and in theaters and clubs for nearly two decades, despite the group’s relative youth. As they’ve ruled the roost with No. 1 Billboard Rock singles like “Trenches”, “Deal with the Devil”, “Torn to Pieces”, “Footsteps”, and “Waking Lions”, they’ve taken their inspired message to the people, on tours with modern rock titans and veteran acts alike.
One listen to any of the songs from the impressive body of work laid down by the band on Lipstick on the Mirror (2008), War of Angels (2011), Onyx (2013), Up (2015), and the self-titled smash Pop Evil (2018) confirms exactly how Pop Evil built such a diverse fanbase. On their go-for-broke sixth album, the group doubles down on the yin-and-yang at the heart of their sound. There’s no other band that bounces between a song like “Waking Lions” and “A Crime to Remember” or “100 in a 55” so effectively and with such overwhelming success.

How are Kakaty, longtime guitarists Dave Grahs and Nick Fuelling, bassist Matt DiRiot, and powerhouse drummer Hayley Cramer able to flip the spectrum so seamlessly? “If my voice sounds good on it, the hook is catchy and memorable with a single listen, and it will go over well live, we’re not afraid to draw from any genre that we see fit for inspiration,” says Leigh. Collectively, the band’s previous five albums account for over a million copies in worldwide sales and over 600 million streams. Lipstick on the Mirror found its way to listeners via a major label re-release, despite the business trouble that resulted in Pop Evil tearing up their major label contract on stage, in what Spin Magazine called one of the Ten Best Moments of Rock on the Range. War of Angels brought Pop Evil to a worldwide audience.
Up debuted at No. 25 on the Billboard 200 and produced no less than three Top 5 Mainstream Rock singles: “Ways to Get High”, “Take it All”, and “Footsteps”, which went to No. 1. This was on the heels of the three No. 1 Rock singles from Onyx. Pop Evil debuted at No. 5 on the US Top Rock Albums chart. “Be Legendary” was one of the Top 10 most played songs of 2019.

The signature Pop Evil elements of the past are found in the music they make today, amplified and sharpened like never before. The utmost respect is paid to the fans; part of that respect is in making sure to never simply repeat what’s come before. The “Evil” will move a crowd. The Pop embodies groove, vibe, and atmosphere, extending a warm welcome to all comers.