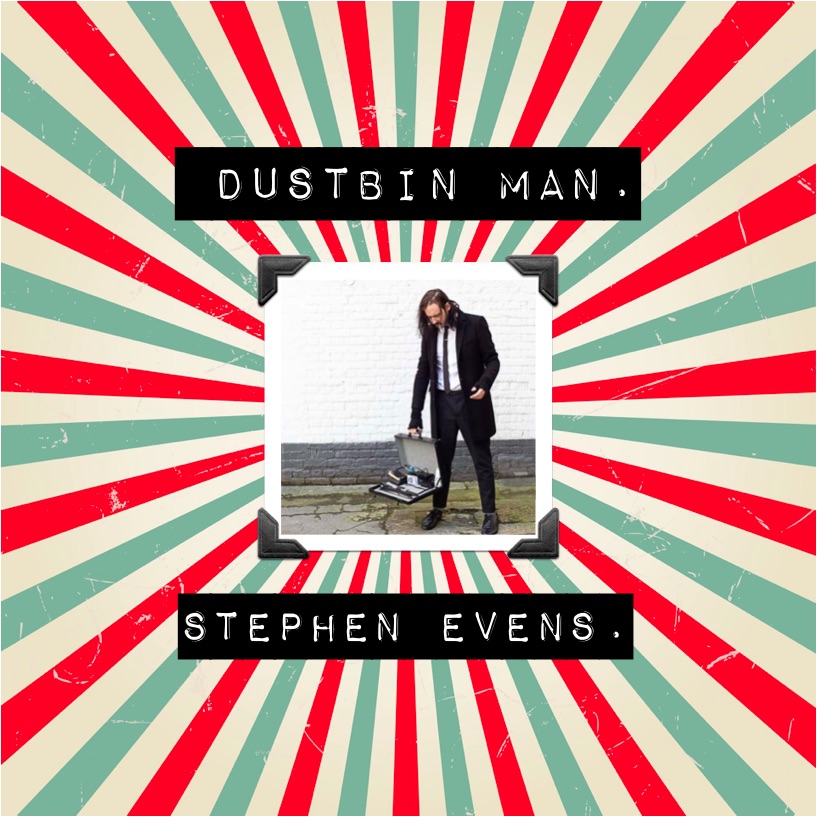 Pulsating, squelching beats, a slight crackling around the edges and this post-punk, indie-pop swaggers with a troubadour style and elegance, while looking at the ironies of existence.  Topped-off with a deadpan delivery EvEns spells it out, with a raw beatnik style poetry and a touch of believable and moving realism.

Jaunty and intricate composition, the track hits a compelling while exotic groove. Dustbin Man is a celebration of everyone from the dustbin man, to social services, to NHS medical staff, commending the people in society that knit-it together in this piece of post-punk, art-beat rock.  A backlash against cuts ‘we’re in this together says nowhere man.’  As the most important people in society are squeezed to the edges in this explicit, energising carefully curated slab of rock.

Stephen explains: ‘I wrote Dusbin Man a while ago. At the time I didn’t realise how poignant it would become. It has always puzzled me that those who look after us are not treated with the respect they deserve. Now we find ourselves in a time that not only are we desperate and reliant on them, but they are literally putting their own health and well-being at risk to keep our essential services running.’

Right now we have an NHS that has been stripped back to the bare-bones and just when we need it. In preparation for a pandemic we are having to take emergency measures, contract out the manufacture of ventilators, re-train medical staff, replenish facilities and hire private hospital beds and hotel rooms. Stephen EvEns looks on with a wry candour, although now things are getting serious. He mocks at a topsy turvy, upside down society, that rewards those who are depleting it while making survival difficult for the very services that nurture and support us.

Multi-instrumentalist and talented artist in his own right, here Stephen EvEns tours with his own guitar and full band line-up and occasional casio-tone. Stephen EvEns plans to even the score with the world, reflecting on the cruel, harsh reality of life. His debut album, Bonjour Poulet, was a brief introduction to his candour and illustrations of the modern day. The album, Employee of The Month is a sardonic take on society, with an element of charm and curiosity.