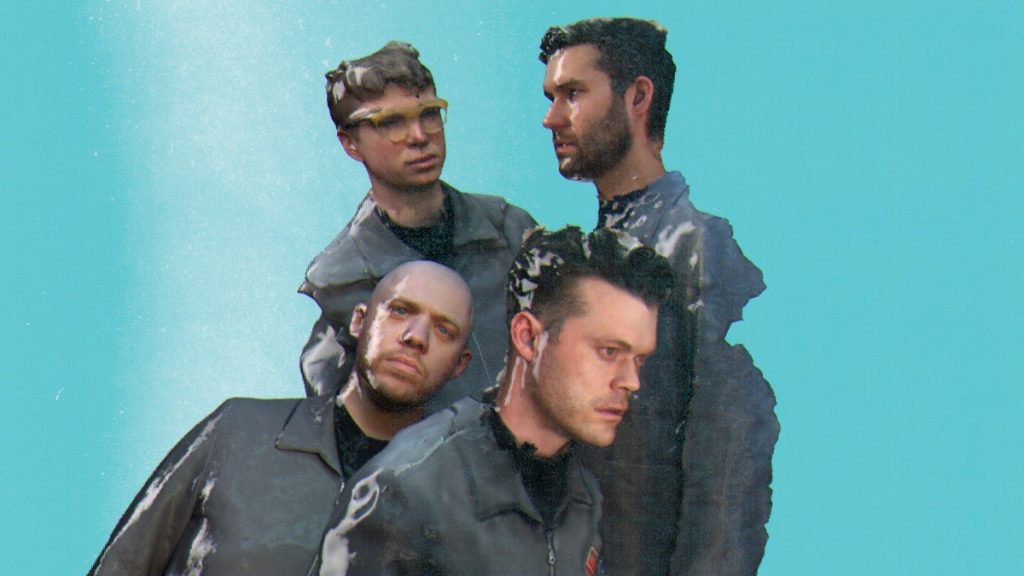 Everything Everything share their new song ‘In Birdsong,’ which premiered on BBC Radio 1’sAnnie Mac show.

The track represents the first new music from the band since the release of their ‘Deeper Sea EP’ in 2018, which followed hot on the heels of their fourth album ‘A Fever Dream’ in 2017. It’s also the first release on their own Infinity Industries imprint, in partnership with AWAL.

‘In Birdsong’ extends Everything Everything’s penchant for unorthodox sonic exploration, with rich synth textures, Jonathan Higgs’ impassioned falsetto and a pulse-like rhythm contributing to its escalating wall-of-sound. Yet as track grows in stature and drama, it reveals an inner beauty powered by a dash of optimism.

Having previously worked with leading producers such as James Ford, Stuart Price and David Kosten, Everything Everything enlisted John Congleton to help unlock their latest creative endeavour. Congleton won a Grammy Award for his work on St. Vincent’s self-titled album, while his other credits include Sharon Van Etten, Angel Olsen and Future Islands.

Jonathan Higgs commented: “‘In Birdsong’ tries to imagine what it would have been like to have been the first self-aware human.

I had come across a concept by psychology academic Julian Jaynes, the Bicameral Mind Theory: the idea that at one stage humans had two separate minds, one inside each half of our brains, and messages or commands would be delivered by one and received by the other. These ‘voices’ were thought to be those of the divine. The theory claims that the eventual melding of these two minds into the two-sided human brain we have now was the dawn of mankind’s consciousness.

I wanted to somehow insert this evolutionary psychology into a song because I felt so in awe of the idea. I found a deep sense of wonder at its core, about life and the world. It applies to songs about love, sex, life, death and humanity – the things I’ve always written about.

We weren’t intending to share this song right now, but in the age of Coronavirus, we wanted to be responsive to the changed landscape and ‘In Birdsong’ unexpectedly emerged as the most appropriate song to reappear with. Birdsong has accompanied human life since before we were even human, but in the recent century it has been obscured or pushed out of our lives. In the song I talk about hearing birdsong and knowing we are conscious and alive. With fewer cars and planes, and less human intervention generally, we’ve all been given the opportunity to reconnect with resurgent nature, and where we all are, for this brief moment – In Birdsong.”

Higgs further explores those themes in the track’s remarkable accompanying visual. When the lockdown made the prospect of filming a conventional video impossible, Higgs instead dedicated his time to teaching himself computerised animation.

The result is the ‘In Birdsong’ visual, which he created entirely independently. It revolves around striking visual contrasts as the scenery twists from naturalistic to apocalyptic to otherworldly. Meanwhile the people it depicts are close to being photo-realistic, a disarming blend of humanity distorted by technology.

Completed by Jeremy Pritchard (bass), Michael Spearman (drums) and Alex Robertshaw (guitar), Everything Everything have forged their own post-genre sound since releasing their debut album ‘Man Alive’ in 2010. Their three subsequent albums – ‘Arc’ (2013), ‘Get To Heaven’ (2015) and ‘A Fever Dream’ (2017) – have all hit the Top 10 of the UK’s Official Albums Chart. The band have been nominated twice for the Mercury Prize and five times for Ivor Novellos.

Along the way they’ve earned widespread critical acclaim. Praise has come from Pitchfork (“Everything Everything make coherent art from the shrapnel of rolling news”), NME (“art-rock’s premier doomsayers”), The Guardian (“Bringers of maximalist mayhem”) and many more .