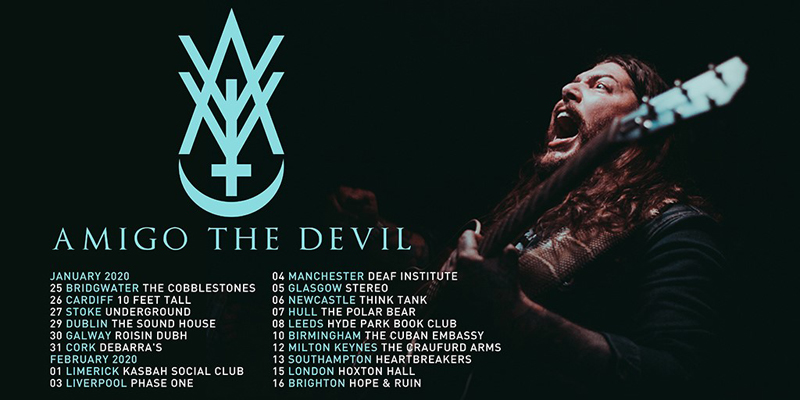 If you have ever heard a room full of people yelling “I hope your husband dies” in some harmoniously sloppy, drunken unison, then you will have stumbled into an Amigo The Devil show.

Danny Kiranos, better known as his musical alter ego, has spent the last few years challenging the expectations of traditional folk, country music purists and rock/extreme metal fans alike with his morbid, yet oddly romantic take on the Americana tradition and has cultivated a dedicated fanbase Stateside.  Despite being armed with only his voice and a banjo/acoustic guitar, an ATD live show is worlds away from what most might expect of a folk show. Loaded with sing-alongs and a sizeable dose of humour to make otherwise grim topics accessible for fans of every genre, his songs remain deeply rooted in the tradition of storytelling that seems to be slipping away from the human condition.

Having released his acclaimed debut album, ‘Everything Is Fine’, in early 2019, ATD has been touring North America relentlessly ever since. He will finally make his long awaited debut in the UK,

RoI and mainland Europe in late January for a tour that takes in 30 towns and cities, stating: ”we can’t wait to meet all of you on our FIRST UK/European Tour! Activate party mode and bring usdelicious food please.”

AMIGO THE DEVIL on tour in the UK & RoI

“Embraces Southern gothic balladry and bluesy rock with influences that

Amigo The Devil is a strange, hard-to-define entity that hovers like a slightly vengeful ghost around the peripheries of metal, dark folk and Americana, claimed by none but with roots in all three. The work of singer-songwriter born Danny Kiranos has been described as ‘murder folk’ in more than a few places, which is both delightful and apt, since his output camps out at the crossroads of Devil Makes Three, 16 Horsepower and Danzig, while his lyrics concern themselves with murder as often as they do love, libations and self-loathing.

Despite his allegiance with the scene itself, the only real heavy metal influence at work here is in the devilish atmosphere and an overall pit-dark vibe that’s a few shades past Southern gothic and has landed him on line-ups with outright doom bands more than once. It’s a curious position to occupy, but Amigo The Devil and his waitin’-around-to-die music makes it seem natural.

‘Everything Is Fine’ is ATD’s first full-length record, and, despite its downhome, rough-hewn feel, it comes stacked with highfalutin credentials. Produced by Ross Robinson (Korn, Limp Bizkit, Slipknot), its percussive elements shaped by drummer Brad Wilk (Rage Against the Machine, Audioslave, Prophets Of Rage), and recorded at Valentine Studios on original 70’s-era gear, the album is ultimately a backcountry nightmare, soundtracked by raspy, slightly unhinged vocals and an overall apocalyptic bent.