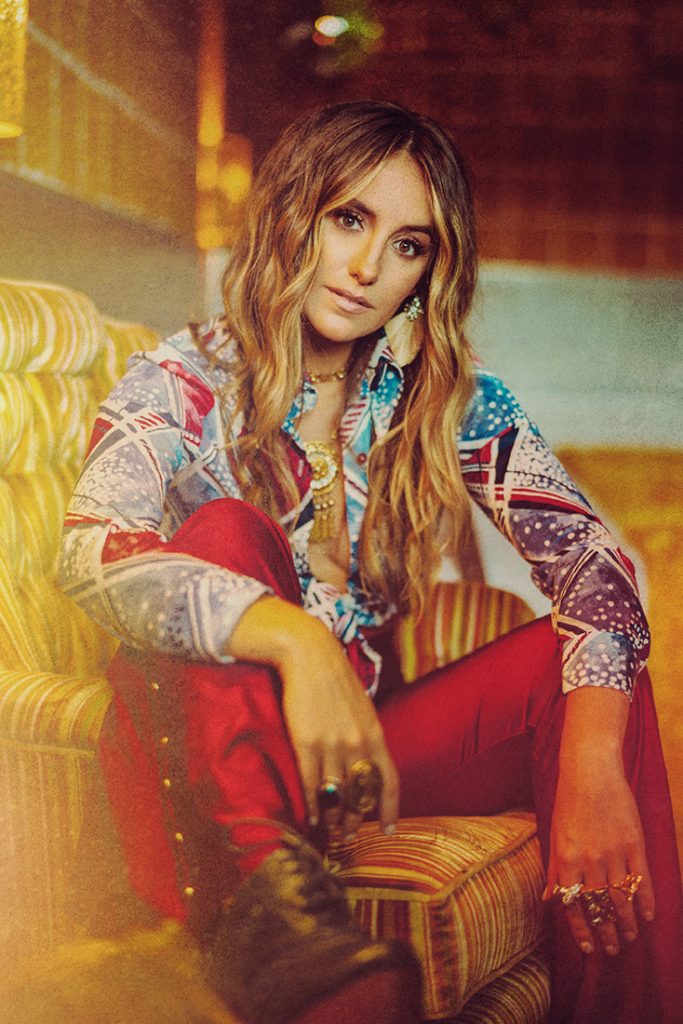 Rising country artist Lainey Wilson released her new Dolly Parton-inspired track, “WWDD.” This song is the first of several new monthly releases which the songwriter recently announced with a hilarious parody video that is quintessentially Lainey, highlighting all of her Bell Bottom Country vibes. Bob Harris premiered the “just fabulous” song as a world exclusive on the BBC R2 country show (listen here).

With “WWDD,” which Rolling Stone (who provided the first look at the video, channeling the high-haired spirit of Dolly), says “mixes a stomping beat with grimy electric guitars out of Sticky Fingers-era Rolling Stones and the arena-size choruses of Eighties Bruce Springsteen,” Lainey shares how she navigates life’s lemons by looking to her role model, the icon, Dolly Parton. Using “what would Dolly do?,” as her guiding compass, the Country newcomer channels the wisdom, kindness, strength and positivity of her idol to navigate life. The high-energy, undeniably Country song written by Lainey, Casey Beathard and Michael Heeney, is filled with rocking electric guitar and sassy charm, reminiscent of the song’s star subject.

“I’ve been playin’ a few new songs at my shows and people seem to be liking them so I figured I should put ‘em out so they can keep liking them. I’m kicking off the release series with ‘WWDD’ because people have started singing along to it before the song is even over,” said Lainey Wilson. “It makes sense. I don’t know anyone who don’t love Dolly. From her sense of humor, to her look, to her songwritin’, to her singin’ to how she has such an incredible giving heart, to how she’s an awesome businesswoman…Dolly does everything just a little better with a little bow on top. Dolly is an international icon and role model for a lot of folks around the world, so it’s an easy song for a lot of people to relate to.”

Last night Lainey hosted a “’WWDD’ Release Party Live Stream” from her living room where she performed several songs and chatted with her fans. Unable to meet fans face-to-face due to the quarantine, Lainey took heed from her own lyrics and decided to “turna little rain into a rainbow,” and came up with a way to connect with fans via a virtual signing. For 24 hours, anyone who posts about “WWDD” and tags her will receive a digitally signed/personalised photo sent from Lainey herself.

Keeping busy while practicing social distancing, Lainey will continue to connect with fans via social media today by helping Country Hits Radio launch their #HomemadeCountryHits campaign with a Instagram takeover and IG live appearance at 8pm GMT, as well as a Facebook Live on One Country’s page, a live Skype appearance on Crave News, a Facebook Live on the Whiskey Riff page, and more.

These monthly releases come on the heels of Lainey’s 2019 EP, Redneck Hollywood. Produced by mastermind Jay Joyce (Eric Church, Keith Urban, Little Big Town), the title of the four-track project is drawn from lyrics in the semi-autobiographical track, “LA,” which celebrates the Louisiana native’s down-home upbringing, zest for life and dreams of making it in this big world. In just four songs (all of which she co-wrote), Redneck Hollywood highlights Lainey’s depth as an artist like never before as she offers a thoughtful look into her psyche and all of its complexity. Mixing traditional Country sounds with grit, soul and just a bit of funk, Lainey has developed her own “bell bottom country” sound that reflects both her personality and her preferred fashion aesthetic. Featured on the EP is her first Country radio single, “Dirty Looks,” which Rolling Stone dubbed “a clever, mid-tempo ballad that mixes double entendres with Wilson’s hazy vocals.”

Named an “Artist to Watch” in 2020 by Pandora, The Boot, and Sounds Like Nashville and included in CMT’s “Next Women of Country” program, Wilson kicked off the year by making her Grand Ole Opry debut—a dream come true for the Baskin, Louisiana native. Hailing from the small farming community, the Country newcomer has as much grit in her as she does soul. She moved to Nashville in a bumper-pull camper trailer to pursue a career in music and has been carving her own unique place in the country music landscape ever since, already garnering early praise for her “unabashedly down-home and unflappably worldly” (NPR) style and exhibiting “just enough scars and pragmatism to write great, universal country songs” (Taste of Country). From landing a TV placement in Paramount Network’s hit series Yellowstone to having co-writer credits on songs recorded by fellow country artists including Luke Combs, the songstress’ talents continue to influence more than just her own artistry. Taking her talents out into the world, Lainey continuously logs an impressive number of miles on the road, performing for sold-out crowds throughout the US, UK, and Germany with notable names like Rodney Atkins, Tyler Farr, Ashley McBryde, Randy Houser, Josh Turner, Morgan Wallen, and more.

With the same vehement determination and unequivocal confidence that has fuelled her momentum thus far, Wilson made her label debut on the BBR Music Group/BMG flagship imprint, Broken Bow Records with her EP Redneck Hollywood, a term which can best be described in her autobiographical track “L.A.” The EP features her first Country radio single, “Dirty Looks,” which Rolling Stonedubbed “a clever, mid-tempo ballad that mixes double entendres with Wilson’s hazy vocals.” Wanting to give her fans more music to sink their teeth into, starting March 27th, Wilson will begin releasing a new song each month with the first being “WWDD,” inspired by the beloved icon, Dolly Parton. Produced by GRAMMY Award-winning mastermind Jay Joyce, Lainey’s collection of songs showcase her prolific songwriting abilities and depth as an artist by offering a genuine, unwithered perspective of someone who endorses a character defined by juxtaposing values such as maintaining high standards without jeopardizing empathy. The natural-born storyteller empowers her audience with honest, yet confident lyrical stylings about her own self-discovery. Undaunted by the inevitable early mornings and late nights that lie ahead, Wilson has no plans of slowing down as she turns her momentum into a movement.