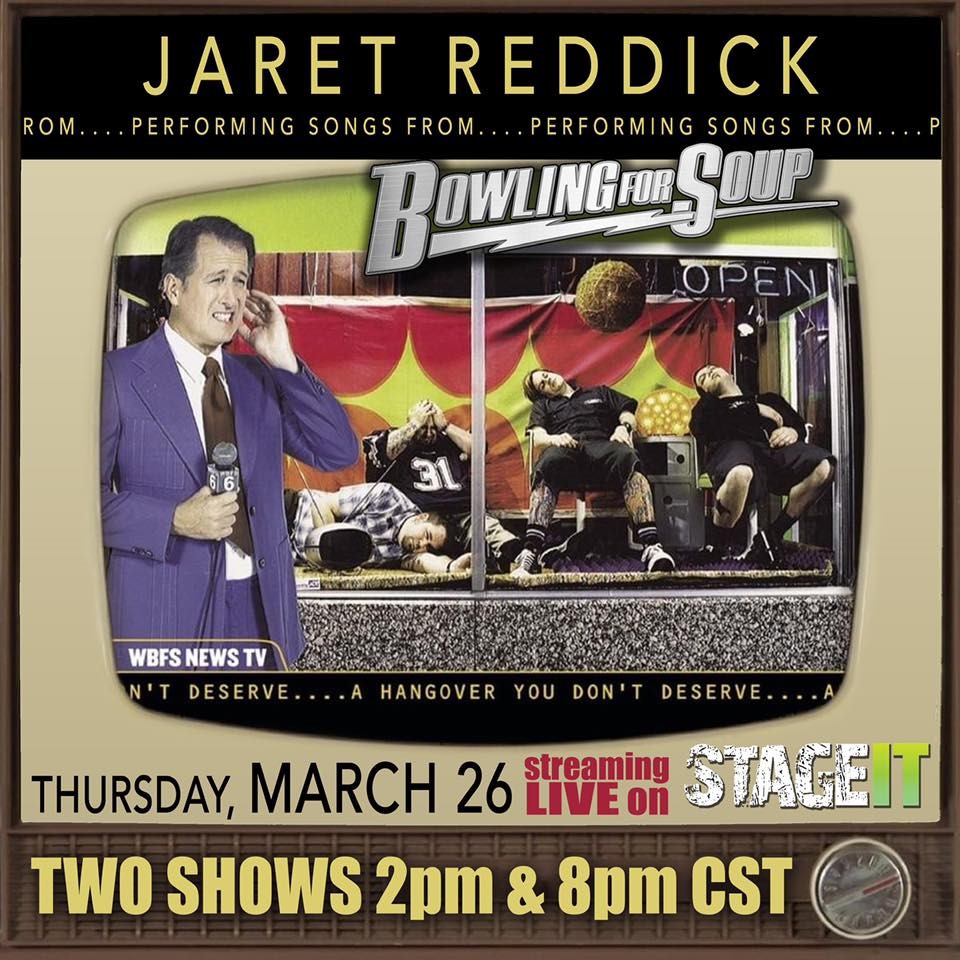 Bowling For Soup frontman Jaret Reddick was one of the first to make use of the ability to stream online shows, having done so for almost a decade. With recent world events, Jaret has returned to performing shows online, having sold out several shows on the StageIt platform in the last week.

With a desire to play and to be able to keep entertaining people in the current situation, Jaret has lined up some very special shows which are set to thrill pop punk fans wherever they may be.

On the 24th of March, Jaret played two shows focusing on songs from Bowling For Soup’s breakthrough album Drunk Enough To Dance. UK fans will fondly remember the 2018 anniversary tour for the album and this was another chance to hear some of the tracks from the album you wouldn’t normally get to hear at a Bowling For Soup show. The shows took place at 2pm and 8pm CST – 7pm and 1am for UK fans. The shows are “pay what you can afford”.

On Thursday 26th of March, Jaret will be performing another pair of shows, focusing on another of Bowling For Soup’s most successful albums, A Hangover You Don’t Deserve. The shows will again take place at 2pm and 8pm CST / 7pm and 1am UK time. Tickets are also again pay what you can afford and available from Stageit

More shows are likely to follow these, so stay tuned for further updates.

Bowling For Soup’s first new original song in over three years, Alexa Bliss, was a worldwide smash hit for the band, racking up a million views on YouTube in three weeks. It also racked up multiple official Spotify playlist adds and features from outlets ranging from Loudwire and Kerrang to The UK’s biggest daily free newspaper The Metro.

The video for Alexa Bliss can be found here:

The track is also available to stream or download on Spotify, Amazon Music and Apple Music.

Like many other bands at this time, Bowling For Soup’s live appearance schedule has been disrupted by the Coronavirus outbreak. Some of their March and April US shows have been rescheduled for late Summer 2020. At the time of writing, Bowling For Soup’s next UK appearance at the 2020 Download Festival remains unaffected – this is subject to change depending on world events and US to European flight restrictions