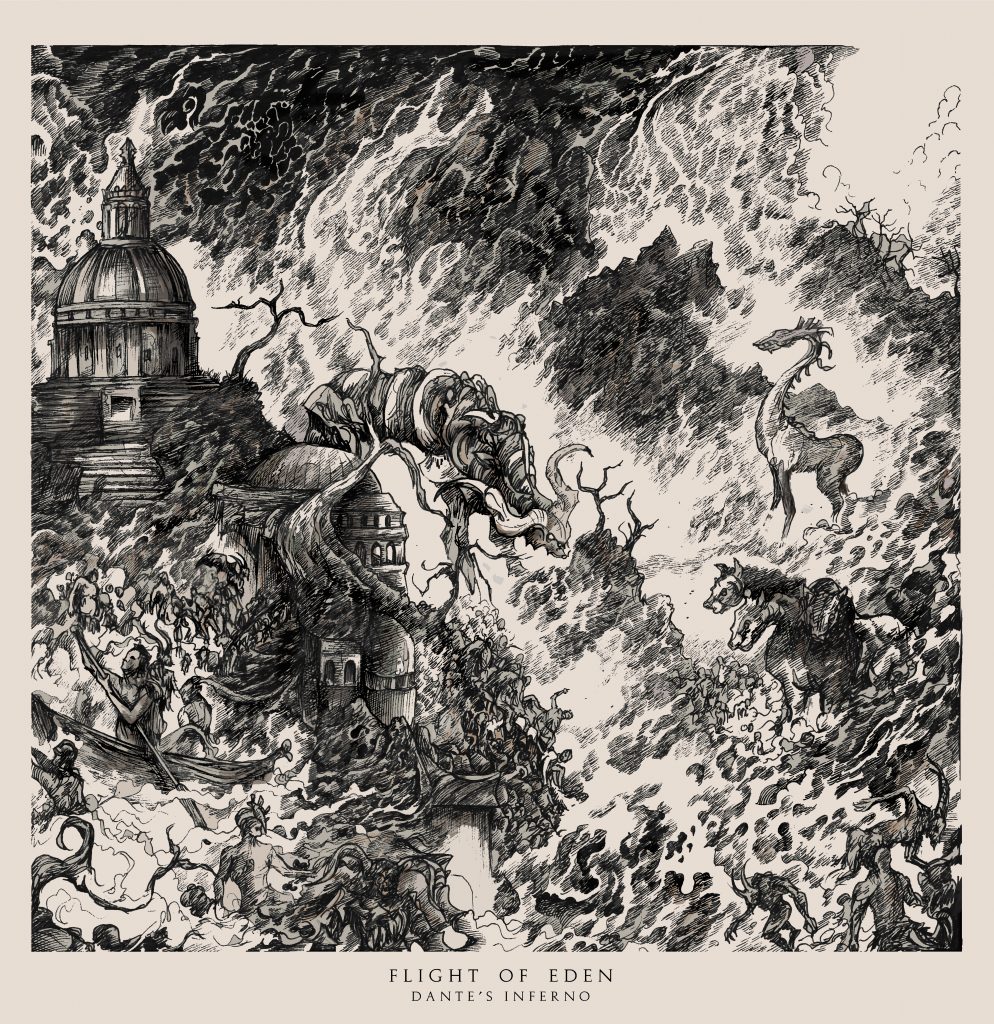 Formed in 2018 from the ashes of three-piece project Zodiark, Reading-based metal four-piece Flight Of Eden are set to release their second self-released EP ‘Dante’s Inferno’ on April 9th.

Since forming,  the band have been endorsed by the likes of Ashdown Engineering, Dingwall Guitars and Payson, played alongside the likes of The Agonist, No Consequence, Confessions of a Traitor and Sumo Cyco and also scored themselves a wicked slot at Portugal’s Monte Verde Festival. They also self recorded, produced, mastered and released their debut EP ‘Transitions’ .

Released in the summer of 2019, ‘Transitions’ showcased the band’s heavier, more groove-laden abilities, blending progressive influences with a definite, technical metal sound. ‘Dante’s Inferno’ however, saw the band hoping to see how far they could push their music, further embracing their ‘proggier’ sound.

‘Dante’s Inferno’ is a wildly imaginative concept EP, based on The Inferno, part of Italian poet Dante Aligheri’s epic 14th Century work, The Divine Comedy. The story goes that on Maundy Thursday, Dante begins his journey into Hell. Guided by the poet Virgil, they descend through the 9 circles of Hell, confronting the horror and sin before them.

“When we were presented with the story of Dante’s Inferno by Kurt, we knew we had the perfect subject matter to craft a musical journey to accompany the story”, says Guitarist Simon.

“With Dante’s Inferno we have achieved exactly what we set out to do, a musical canvas which features all areas of influence for us all as musicians, while maintaining a pace and energy throughout that hopefully keeps the listener hooked.”

Entirely self produced, mastered and released, the band then commissioned artist Will Cross who has worked with the likes of Monuments to illustrate their EP artwork. A really clever piece of work which incorporates a lot of the themes that run through the EP lyrically. It doesn’t matter how many times you look at it, you’re guaranteed to find something new hiding in plain sight.

The band didn’t just stop at the EP material with their use of symbology however, it also extends to the EP’s release date.  Maundy Thursday this year, the day in which Dante commenced his journey into Hell, is April 9th and what a fitting date for the band to release this incredible sonic journey.

Dante’s Inferno is due for release April 9th and will be available on all major platforms.

FLIGHT OF EDEN ARE: