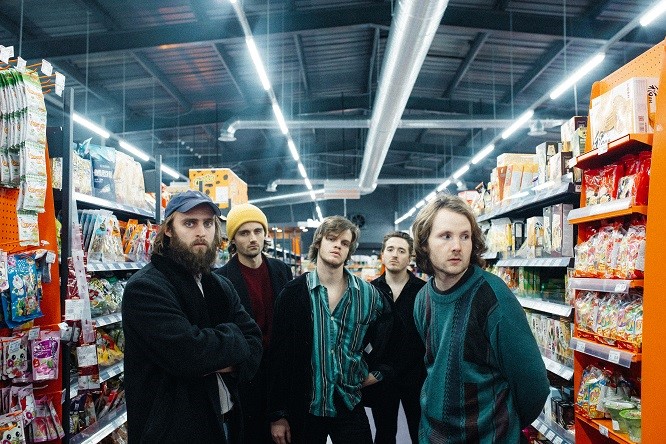 Sheffield’s SHEAFS release their debut EP “Vox Pop” this Friday, March 6th, on Blood Records (Dream Wife, The Blinders, The Amazons etc.). Ahead of the release on Friday, they have shared a final taster from it in the form of single “Thinking Out Loud”.

In a new interview, the band explain the meaning behind it:“The idea was to capture the array of disorganised thoughts that often fill our heads throughout the day. The contrast of associating laundry and bigger world issues was one that we found interesting”.

Listen to “Thinking Out Loud” HERE

The band kicked-off their headline UK tour at The Grace in Islington, of which 3 out of 5 dates have now sold-out (including the extra date added to their hometown due to demand for the first). The band have also announced they will be supporting The Slow Readers Club on five of their UK tour dates starting in Liverpool on March 27th. SHEAFS have also been added to the line-up of this year’s Tramlines Festival in August.

Previously, the band shared the blistering single, “Total Vanity”, which they described as being, “predominantly about our fascination and consumption in relation to self-image, and acknowledging the strain of that.”

Produced by Dead Nature/Spring King talent Tarek Musa and Jonathan Hucks, “Vox Pop” was laid down with a short turnaround at Whitewood Recording Studio, Liverpool, before the band headed down south to Essex to finish the EP off. The tracks were then finalised and mastered by the acclaimed Mike Cave (who recently mixed and mastered Lewis Capaldi’s latest chart-topping album).

Across the EP the band match lyrics confronting the frustrations of a consumerist world that profits from people’s low self-esteem and self-doubt, with the everlasting blistering energy of pounding riffs, and the fire found in the stomachs of the passionate youth up and down the country.

First single “Care Less” made the band favourites of BBC Radio 1’s Jack Saunders and saw them team up with director and videographer Sam Crowston (The Blinders/No Hot Ashes), to produce a humorous video, as-filmed at Sheffield Hallam University.

After a series of demos and raucous live shows saw the band earn a dedicated local fanbase, in 2019 SHEAFS took their sound out across the nation. The band toured the UK, won over festivals crowds at Dot2Dot, Tramlines, and won a slot at Madrid’s Mad Cool Fest after coming first in the ‘UK Talent’ section out of thousands of entries.

Their rise has been propelled by consistent support across major national radio stations including the afore mentioned BBC Radio 1, as well as at BBC 6 Music, Amazing Radio, Radio X and Virgin Radio.

Following a stint of high profile support slots with the likes of The Amazons, The Coral, and IDLES, plus their recent tour with US rockers Greta Van Fleet which saw them win over audiences all over Europe, the band will release their highly anticipated debut EP “Vox Pop” on March 6th via Blood Records.