SHE WANTS REVENGE – Back Together Again

“When I started going to concerts again, simply put, I got the itch,” says Justin Warfield of dark alternative band SHE WANTS REVENGE who are extending that itch to their fans with the announcement of a Summer tour.

Like most bands, the pandemic kept touring and creativity in a state of stasis, and with a return to live music this year, Warfield and Adam Bravin are hitting the road as She Wants Revenge and reuniting… this time, hopefully, for good.

With a setlist planned to keep both new and longtime fans happy, the band are rejuvenated and ready to bring their audience back up on their feet. “Adam and I made individual lists of what we’d most like to play live, and they were actually quite similar,” Warfield says. “The songs we may pull out on any given night are personal favorites, what we feel reflects our headspace and musical taste at the moment, and obviously the hits, though it sounds funny to say that.”

Kicking off at San Diego’s Music Box on August 11th, the dates focus mostly on the western half of the States.  “Being without live music for such a long stretch during the pandemic was devastating not only as a fan, but also as a musician,” he states. “When it was finally safe enough to unmask and play with friends in a rehearsal room, it was amazing, but it still wasn’t the same as the unpredictability and energy of a real show.”

After two indefinite band breakups (the first in 2012 after the release of 2011’s Valleyheart and again in 2020 after their four-year reunion tour), the original duo of Warfield/Bravin decided to get together and hash out their differences – hopefully this time permanently and redefine what exactly She Wants Revenge is. After a month-long conversation about the good, the bad, and the ugly of their long and fruitful, yet complicated relationship and after some tough conversations, soul searching, and a willingness to do the work, they found a way forward. No longer would the band themselves or the fans be deprived of more music. 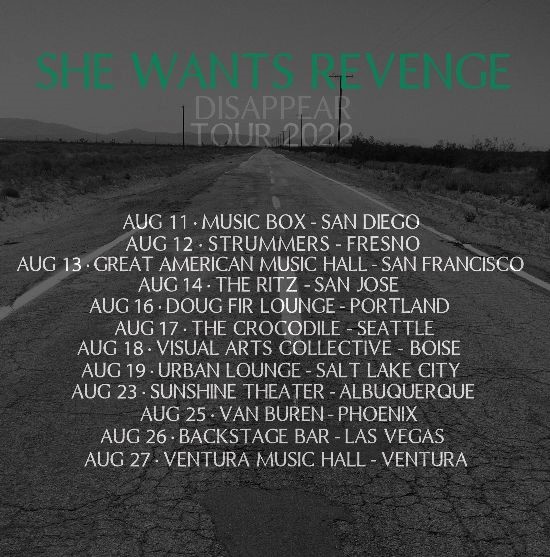 “The disbanding in 2020 was the culmination of almost two decades of an incredible, fruitful, creative, yet challenging partnership – anyone who’s been in a long-term relationship can understand,” Warfield admits. “We’re very different people, and neither of us is without fault. But once I realized I wanted to continue with the band, I felt that do so together required us to sit down and really unpack the last 18 years, be honest in a way we perhaps had never done before, to explore what we wanted as individuals, and then see if that was something which could work for one another.”

Having exploded on the scene in 2005 with their evergreen hit single and dance floor classic “Never Tear You Apart,” which brought the band a massive audience and supporting slots for Bloc Party, Depeche Mode, Psychedelic Furs, co-headlining with Bauhaus’ Peter Murphy, and a headlining Coachella slot alongside Daft Punk, the musically formidable band exploded in the alternative scene with a handful of singles including “Out of Control” and “These Things” just as streaming drastically reshaped the industry. Persevering and collaborating with Timbaland, making videos with Shirley Manson and Joaquin Phoenix, She Wants Revenge flourished in the post-punk world while running counter to their dance punk and emotionally distanced contemporaries by keeping their heart-on-sleeve lyricism front center.  But as with any creative duo, the visceral and emotional immersion that enveloped the pair slowly proved to be their undoing and the two creative forces split to tackle solo artistic endeavors.  But as fate wasn’t done with them yet, while it drove the pair apart, it also brought them back together… this time with a modified mission statement.

With a new understanding of what the band is, the duo expanded to a five-piece. “The new lineup is myself on vocals and guitar, Adam on synths, keys, samples and effects, Thomas Froggatt (who formerly played guitar) on bass, Spencer Rollins (a longtime creative associate and friend of the band) on guitar, and David Goodstein (a good friend of ours who’s done session work for both Adam and me) on drums. It’s the first time we’ve been a 5-piece, and the energy, musicianship, and vibe are really exciting, and I think fans of the band will be very pleased.”

Ready for a new chapter in the shifting evolution of the band, Warfield is excited. “We really just want to continue to grow, both creatively and in reach,” he smiles. “We know who we are as a band, but we’re also not the same guys who made that first record, so musically there’s a lot left for us to explore.”