Towersey Festival, the UK’s longest-running independent festival, organised by generations of the same family, will  take place this year in the stunning new location of Claydon Estate, Buckinghamshire over August Bank Holiday weekend.

It’s come a long way since the first event in grandpa’s back garden in 1965.  The now well-established festival, is a firm favourite of the local communities throughout Bucks/ Berks and Oxfordshire and merry making lovers of folk & alternative music from across the UK.

With a mix of contemporary and traditional acts such as sea shanty band The Longest Johns who made the news on Tik Tok last year to Scottish alternative Rock Band Del Amitri, whose 1990 anthem ‘Nothing Ever Happens’ is a guaranteed sing-a-long to end the festival on bank holiday Monday & this year Towersey are proud to welcome IMELDA MAY  to the top of the bill!

“I’m really looking forward to performing at Towersey over August Bank Holiday – It’s a great family festival with its roots in folk, Celtic and alternative music, so I’ll feel right at home! Along with performing tracks from my new album and some old  favourites, I’ll be taking my family and joining the Ceildh,the crowd at Towersey are always super friendly and  it’s such a great way to bring people together and lose your inhibitions” Imelda May

As one of Ireland’s most respected female singer songwriters, with a love of storytelling, her last album ‘ 11 Past The Hour’ (Decca) featured Ronnie Wood,  Noel Gallagher,  Miles Kane & a cohort of female activists, brimming with sensuality, emotional intelligence, spirituality and intuition, it was Imelda at her most authentic.  Her performances are always an invigorating statement of rock n’ low slung blues. Last year’s album release saw  Imelda  playlisted on Radio 2 & performed live on Graham Norton’s TV show with a great spread of accolades from print media. 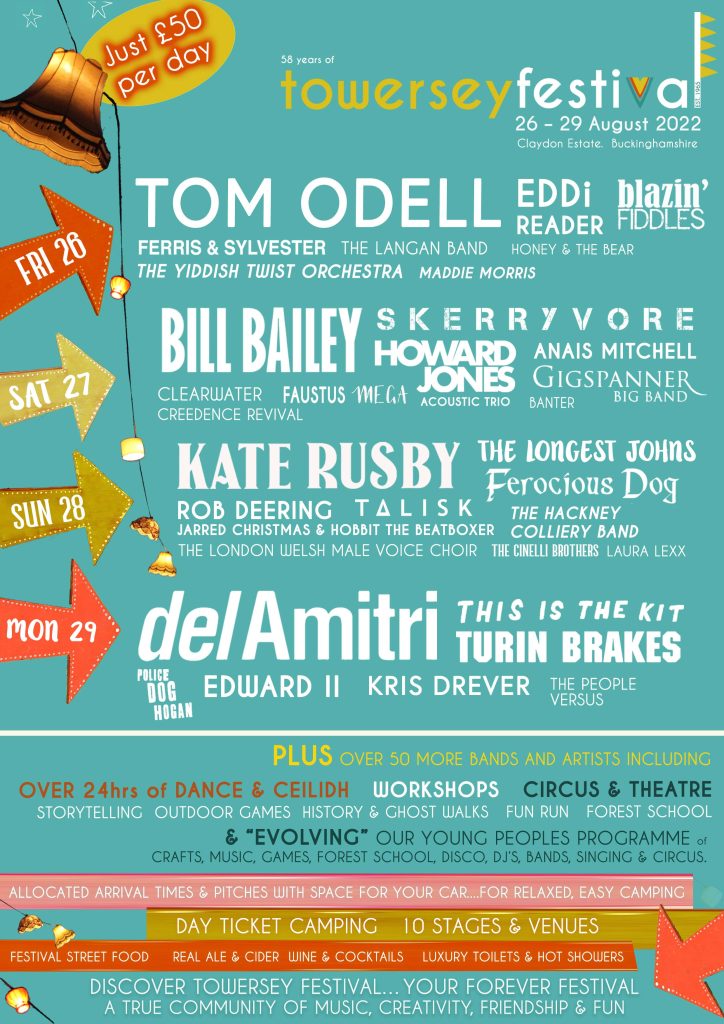 Over at the Festival Dance House, there will be swing & jive dancing, along with ballroom, ballet, contra, a silent disco, music from the Yiddish Twist Orchestra,  DJs playing Afrobeat, roots reggae and blues and over 24 hours of ceilidh.

Away from the music, there are plenty of fantastic activities to ramp up the joy at this wondrous festival. With family at its heart, Towersey hosts a range of thrilling activities for families of all ages including circus & theatre shows, storytelling, outdoor games, history & ghost walks, a fun run, forest school, campfires and music jams, alongside a new “Evolving” young people’s area launching in 2022, which will feature everything from crafts to discos.

There’s so much happening at Towersey, some serious re-fuelling will be in order and the festival is upping the grub game. Expect dedicated street food areas where festival-goers can feed up, wind down and send their bellies on a world tour with cuisines from every corner of the globe. Add to this cafés, bars, shops and stalls, plenty to keep everyone with a full tank!

Towersey Festival is the UK’s longest-running independent festival. Established in 1965 as a one-day event to raise funds for the repair of Towersey Village Hall, the festival has grown to become one of the UK’s major arts and music festivals. Staying true to its ethos of creating a community of music, creativity, friendship and fun. Run by three generations of the same family (with a fourth in training) since its very first iteration,  In 2022  it will move to its new home of Claydon Estate, Buckinghamshire, just an hour on the train from London.

Festival Director, Joe Heap, said: “The sense of community, joy and togetherness that is at the heart of Towersey is something we are all longing for right now. We want nothing more than to be back in a field dancing with you and your loved ones under the sun. We’re excited to be in our beautiful new home of Claydon Estate in Buckinghamshire for the most exciting festival yet, a worthy testament to my grandad it’s founder back in 1965”