‘Round The Bend’ – Dinosaur Pile Up 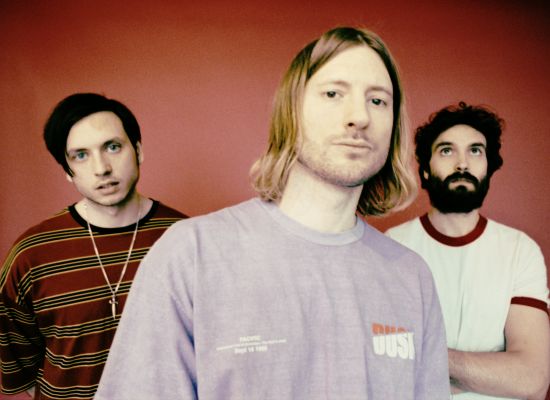 Dinosaur Pile-Up have recently released the video for their latest single ‘Round The Bend’, which premiered in the US with Consequence Of Sound and is taken from the acclaimed new album Celebrity Mansions out now via Parlophone.

Created by Toon53 Productions, the animated video depicts a heart-wrenching story of lost lovers and a car-ride gone wrong.

Regarding ‘Round The Bend’ frontman Matt Bigland says, “‘Round The Bend’ is about being at the very edge of your emotional strength. I wrote it when I was at a breaking point of sorts, where I felt like what I’d been trying to make happen with the band for 12 years wasn’t in fact going to happen. When I wrote the song and whenever I listened to the demo, I’d imagine this short film playing out in my head – the story was extremely vivid in my mind and really heart breaking. Seeing yourself immortalized as a cartoon is always a trip, but the end result had us all bouncing off the walls!”

Dinosaur Pile-Up have released the video to mark the announcement of their largest US headline tour yet, which will see them headline 15 dates across the States throughout April and May starting on April 16th. In addition the band will be playing US festivals including Shaky Knees, Epicenter, Welcome To Rockville and more.

Before this Dinosaur Pile-Up will be playing their largest headline UK show to date at London’s O2 Forum Kentish Town on April 3rd, with tickets selling fast. The band have also announced a warm-up show at The Wardrobe, Leeds on April 1st.

All tickets are available via http://www.dinosaurpileup.com/

In the summer Dinosaur Pile-Up will be returning to the UK to play a string of festivals and have already been announced for 2000 Trees, Y Not Festival, Burn It Down and Boomtown, as well as European festivals including Mad Cool in Spain and Ireland’s Sunstroke Festival, with more to be announced soon.

The release of their new album Celebrity Mansions last year saw Dinosaur Pile-Up lay claim as one of the UK’s most exciting and talked-about rock bands on both sides of the Atlantic. Their singles became radio smash hits and the album was touted in a Best Of The Year lists across the board.

The group were also featured on the cover Upset Magazine, whose four-star review touted the record as “one of the most attention-grabbing albums of 2019.” NME raved, “Dinosaur Pile-Up might have become the most tuneful group the UK rock scene has to offer right now. Their new album, Celebrity Mansions, should be renamed Welcome To Hitsville. Seriously. It’s stunning,” while Kerrang exclaimed, “10 absolutely killer bangers, with the promise of 100 more.”

There is no letting up for Dinosaur Pile-Up in 2020 as they continue their stratospheric rise.

5th – Burn It Down Festival, Torquay