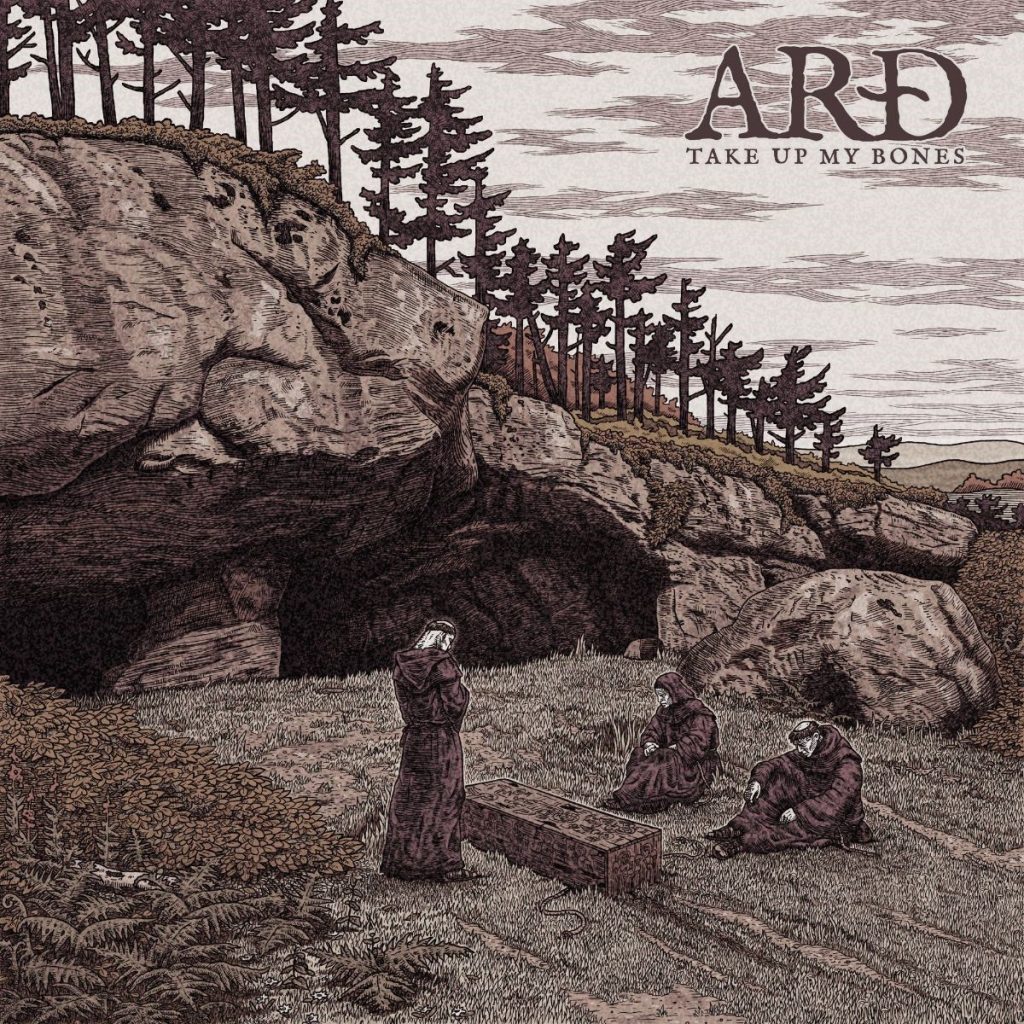 Everything about ARÐ and their critically acclaimed debut album “Take Up My Bones” has been diligently conceptual and revolving around the epic two-centuries-spanning journey of St. Cuthbert’s relics from the Lindisfarne monastery across the Anglo-Saxon kingdom of Northumbria to their final resting place in Durham Cathedral.

To add even more Northumbrian flavour to his dark monastic doom project, ARÐ mastermind Mark Deeks has teamed up with Lindisfarne Mead for a special gift set that comprises a copy of his album in CD format, a 1 litre bottle of their collaborative 14.5% ARÐ dark mead and 1 or 2 St. Cuthbert’s mead cups. This unique bundle will be available for sale from mid-March, but forward orders for this can be made now.

ARÐ comment: “I am thrilled to be partnering with the artisan mead winery from the very same beautiful island that St. Cuthbert called his home”, writes musical and lyrical mastermind Mark Deeks. “The team from Lindisfarne Mead have been very supportive and generous in creating this unique gift set to celebrate the release of ‘Take Up My Bones’. They had the patience to work with me on every detail. The result is a beautiful combination of a dark mead fitting the music and cups bearing the symbol of Northumbria’s lengendary St. Cuthbert. I believe that this provides a perfect combination to savour and accompany this sorrowful tale. Cheers!” 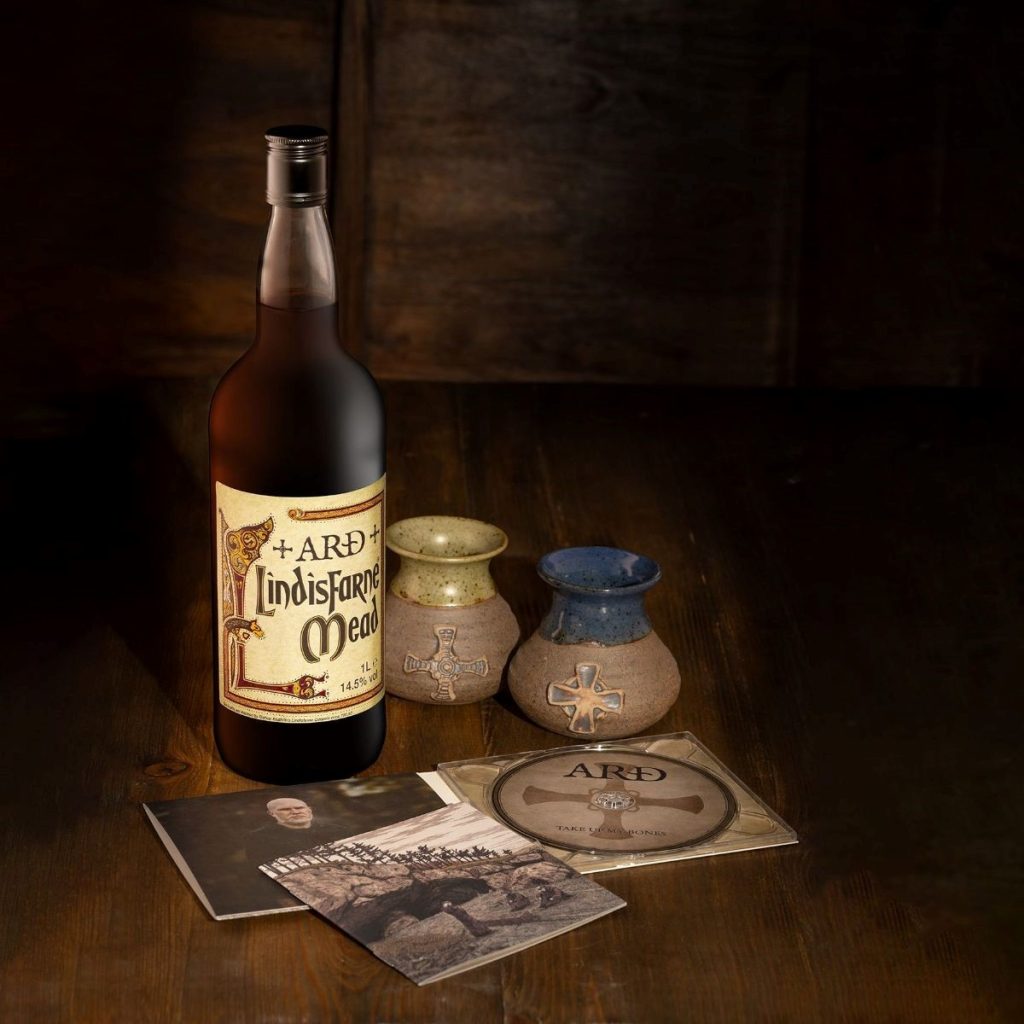 Lindisfarne Mead adds: “The dark mead that is included in our gift set pays homage to the history of the region spanning as it does from AD 55 and the arrival of the Romans, who built Hadrian’s Wall to the construction of Durham Cathedral in 1108 to finally house the relics of St Cuthbert on the site of his internment in 955 AD”, explains winery representative Paul Stephenson. “The Holy Island of Lindisfarne is a tidal island off the Northumbrian coast, which is steeped in history. From here we operate the production, head office, and shops of Lindisfarne Mead. We are immensely proud of our heritage and links with the island. This special history, the island’s priory and St. Cuthbert’s times, life, and prophecy that are captured so beautifully in the famous Lindisfarne Gospels have now also inspired and are echoed on ARÐ’s album. We are renowned for our light flavoursome meads, and we believe that this collaborative dark mead is an ideal way to celebrate this album; perfect to sip and reflect as Mark’s evocative music plays.”

“Take Up My Bones” is streaming in full at the link below:
www.youtube.com/watch?v=sLlRDVsZYTY&list=PLToXWne2Bk-cTEL2lmzFYChkxd8Yq0Oj_

ARÐ are of Northumbria. The band’s name is taken from an Old English word meaning “native land” in the dialect of the Anglian Kingdom of Northumbria. The concept behind the debut album „Take Up My Bones“ from this insular doom metal project revolves around the legendary relics of the famous Northumbrian saint Cuthbert (634–687) and their long journey. 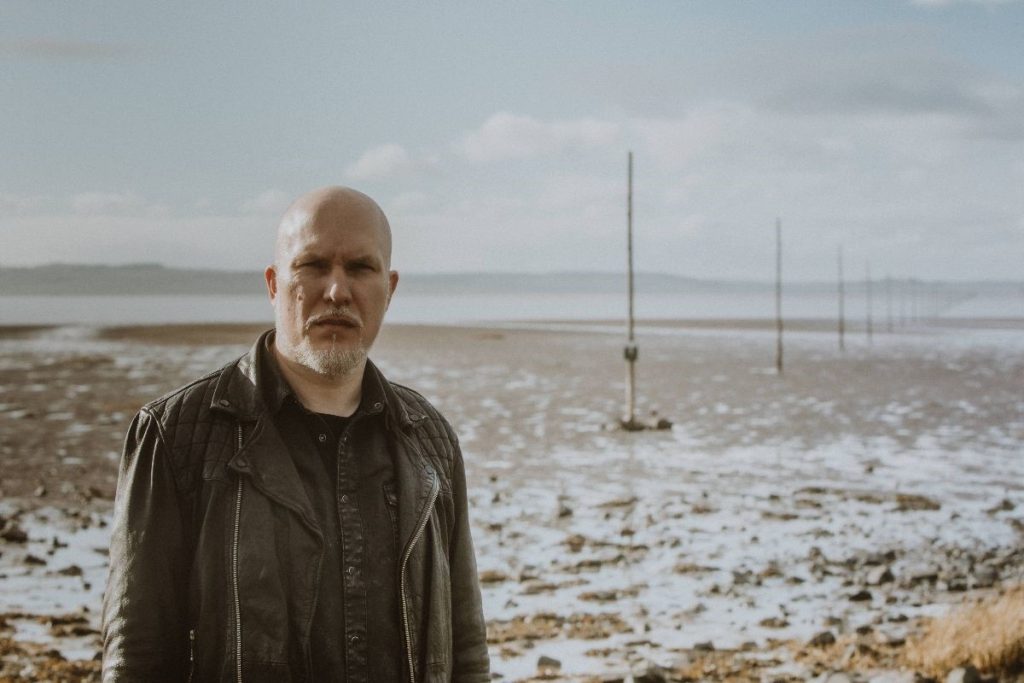 The theme that has inspired mastermind Mark Deeks would easily fit into the black metal mould were it not for the holy man. This particularly harsh style has a long history in the wake of BATHORY’s pioneering works of being deeply rooted in the native traditions of their homelands. Countless Norwegian, Icelandic, and Swedish bands referring to the myths, sagas, and history of the Viking age offer a strong case in point.

Yet ARÐ transfer this artistic quest for heritage and identity upon a solid doom foundation, which in itself constitutes a new approach. And while the topics of prophecy, funeral, and hermitage related to St. Cuthbert are quite suitable for the doom genre, which often deals with death, melancholy, and sorrow, the soul-search through history and time on “Take Up My Bones” reaches far deeper than mere gothic ornamentation.

While the early medieval histories of Europe’s Scandinavian North and neighbouring Scotland have been rediscovered, glorified, and blended with nationalistic politics during and following the 19th century romantic movement, Northumbria’s past has received surprisingly little attention – despite this beautiful land between two seas having been a flowering cultural focal point for centuries; with vectors of influence incoming and outgoing from and to all over Europe and beyond.

The early medieval Anglo-Saxon kingdom of Northumbria that inspired ARÐ was far larger than the historic English county Northumberland implies. After the dynastic fusion of the older kingdoms of Deira and Mercia in the early seventh century, Northumbria reached at its greatest expansion in the east from the River Humber, from which it took its name (“North of the Humber”) and the river Mersey in the west of what is now Northern England. Its northern territories included the southern half of Galloway and reached westwards to the southern shore of the Firth of Forth above Edinburgh, which later in medieval times became part of the kingdom of Scotland.

Before the Germanic warriors arrived, at first as a part of the Roman armies and later as conquerors, the Romans had subjugated the local population of Brittonic Votadini, speakers of a Celtic language. Rome’s legions brought units from across the empire as far away as archers from Syria to what is now the north of England. The name of the Votadini resounds in the Old Welsh poem “Y Gododdin”, which describes a battle between the Britons and the Saxon invaders of these lands that the latter named Northumbria. This epic poem might contain the earliest reference to a pseudo-historic character whom the Normans centuries later called King Arthur in the lines: “He fed black ravens on the rampart of a fortress – Though he was no Arthur”.

Yet the Romans had left another legacy that firmly took root in neighbouring Ireland and soon began to affect the new Germanic rulers of these northern lands as well as ultimately inspiring the tale of “Take Up My Bones”: Christianity. The early medieval coastal monasteries of Whithorn in the west and Lindisfarne to the east bear witness to this transition. It is in Lindisfarne on Holy Island in the time after the devastating Viking attack from across the sea in the year 793 where the story of the remains of St. Cuthbert begins: a 200-year journey that saw the saint’s remains finally reburied in the cathedral of Durham. The legends and mystery of the translation of the saint’s relics such as the refusal of his coffin to be moved or the lack of corruption upon his corpse after decades shape the core of this conceptual musical tale.

With crushing glacial-paced doom, monastic sounding chants and choirs, and sorrowful yet epic melodies, ARÐ have found the perfect musical expression to tell a tale of their homelands.

Mark Deeks, who earned his PhD in Philosophy on the topic of “National Identity in Northern and Eastern European Heavy Metal”, is also a member of leading UK black metal stalwarts WINTERFYLLETH and keeps himself busy as a musical director, arranger, piano coach, and conductor as well as a best selling author. On “Take Up My Bones”, Mark is supported by WOLCENSMEN mastermind Dan Capp on guitars and backing vocals. He is also joined by ATAVIST drummer Callum Cox, and a spellbinding performance from cellist Jo Quail (MY DYING BRIDE et al.) delivers the coup de grace.

With “Take Up My Bones”, ARÐ offer deep and fascinating doom metal that musically stands out with its monastic soundscapes while also masterfully telling a story rooted in a magic place that has been called home by many cultures, which shaped a modern identity that builds on the rich heritage of centuries.