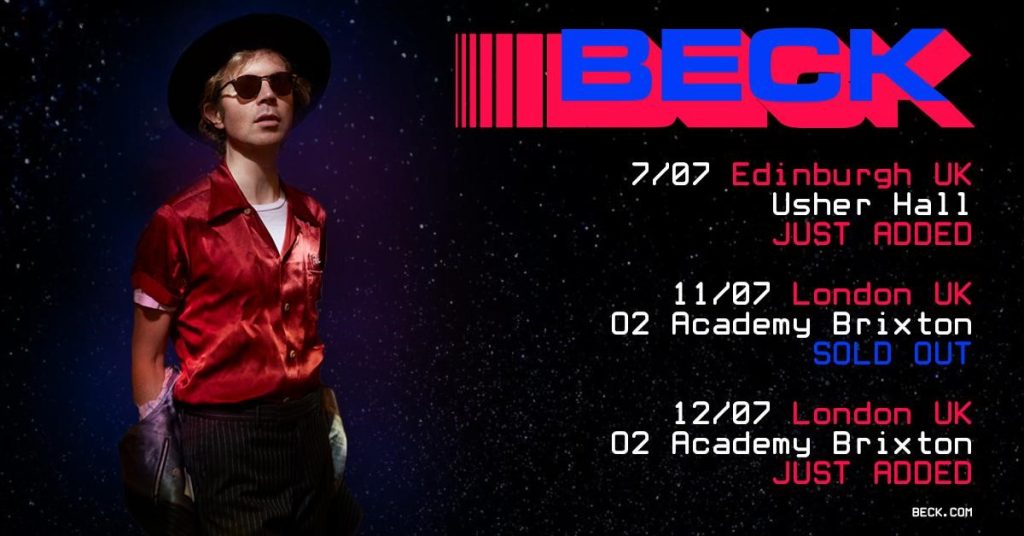 These will be the third and fourth dates of his highly anticipated return to the UK, with previously announced shows at London O2 Academy Brixton (11th July) selling out in a matter of hours and last few tickets of Manchester O2 Victoria Warehouse (9th July) set to follow soon.

The shows will mark Beck’s first live shows in the UK since his lauded Second Stage Headline slot at All Points East in May 2017. Today’s announcement comes hot-on-the-heels of his critically acclaimed, sold out 2019 headline tour of the US. NME heaped praise on the New York date stating that ‘with an arsenal of bonafide classics to dip into and a carpe diem attitude fuelling his fire, this could well be one of Beck’s best (tours)’ ( **** 4 stars). With a set drawing from every era of Beck’s unrivalled back catalogue, The Times heaped praise on his last visit to UK stating that ‘With a huge range of material and exuberant band, (Beck) was like a one-man festival’ (**** Four stars) and that ‘Among modern pop stars perhaps only Prince had more range…. a ruthless maestro in playful mood.’ The Guardian reflected the same celebratory mood, noting that ‘The pop maverick marshalled his many guises for an exhilarating two-hour set that veered from acoustic ballads to rubbery funk and jerky new wave.’ ( **** 4 stars).

Away from the live arena, Beck remains as creatively restless as ever, a master of reinvention achieving yet another career peak in the studio. As the title of his critically acclaimed new 14th album Hyperspace implies, Beck has traveled light years from his emergence as a reluctant generational spokesperson. In the decades since, Beck’s singular career has seen him utilize all manners and eras of music, blurring boundaries and blazing a path into the future while simultaneously foraging through the past.

Hailed by NME as ‘Pop minimalism that proves there’s no sound he can’t excel at’ (**** Four Stars) and ‘A bleak, spacey R&B tour de force, it’s dewy, plush and on-trend (**** Four stars)’ by The Observer, Hyperspace’s futuristic spectrum is the result of one of Beck’s most collaborative albums to date.