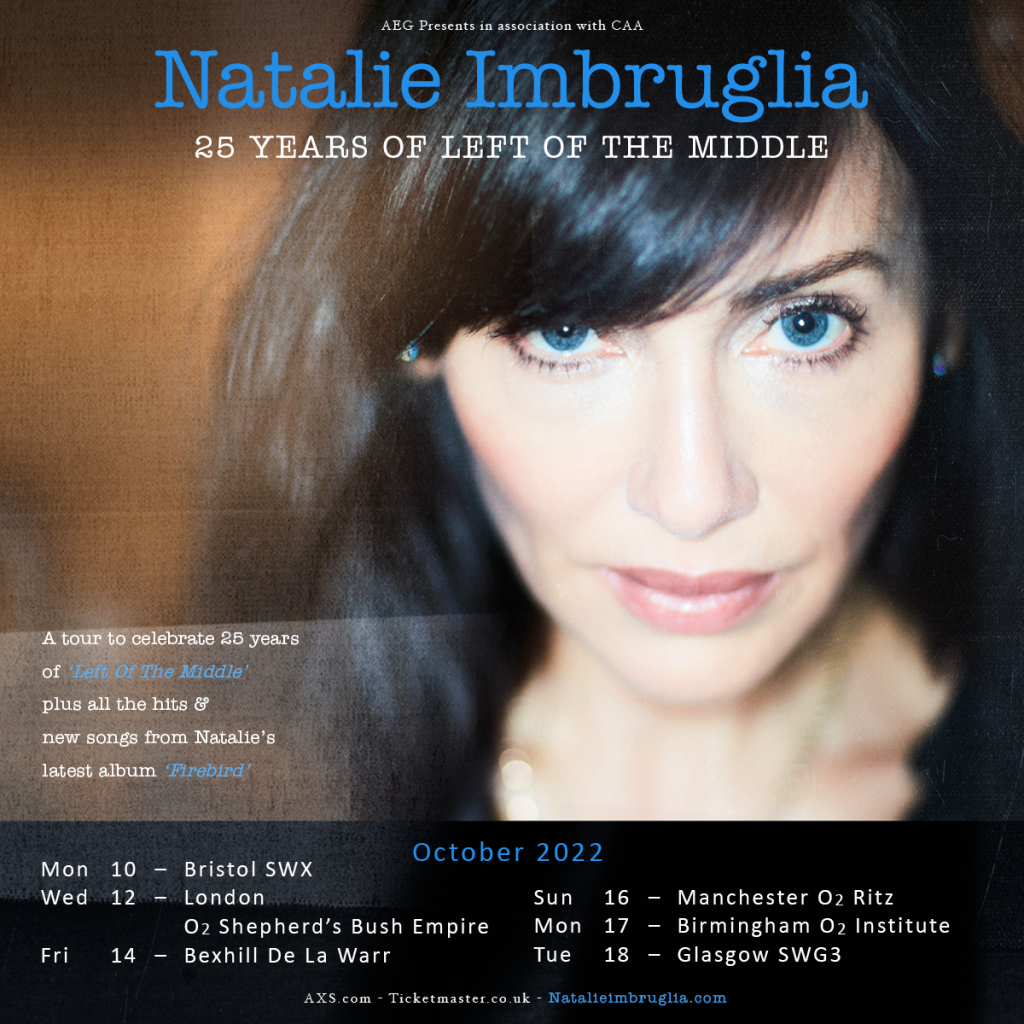 NATALIE IMBRUGLIA will be marking the 25th anniversary of her landmark album ‘Left Of The Middle’ with a series of special live shows in October.

A celebration of the album that made her a global star, the tour will see the Australian/British star revisiting the multi-platinum debut album, as well as hits from her accomplished career to date plus songs from her latest album ‘Firebird’.

Full dates and details are as follows:

Natalie Imbruglia
25 Years of Left Of The Middle

Tickets will go on sale Friday 18th February @ 10AM HERE

A quarter of a century on since the alternative-pop singer made waves with hits like “Big Mistake”, “Wishing I Was There”, “Smoke”, and of course “Torn”, Natalie Imbruglia will be revisiting her seminal debut 1997 album.

Released on 24 November 1997 by RCA Records, ‘Left Of The Middle’ was an instant hit. Reaching the No.1 spot in Australia, the record would also score Top 10 chart positions globally including the UK, USA, Canada, Germany, Switzerland and more, with sales going triple-platinum in the UK alone.

Leading with the timeless single “Torn” (which would become a No.1 record in charts across the globe, spending 14 weeks at No.1 on the Billboard Airplay Chart and selling over four million copies), Imbruglia would go on to win scores of awards including 2 Brit Awards, 8 ARIA Awards, 1 Billboard Music Award, 3 MTV Music Awards and 3 Grammy nominations.

A testament to its enduring appeal, ‘Left Of The Middle’ has sold over 7 million copies to-date and stands as the ‘best-selling debut album by a female Australian singer’ ever.

Revisiting the album, ‘Natalie Imbruglia, 25 Years of Left Of The Middle’ promises a unique opportunity to catch one of Australia’s most loved artists showcasing some of her finest work on major stages across the UK.