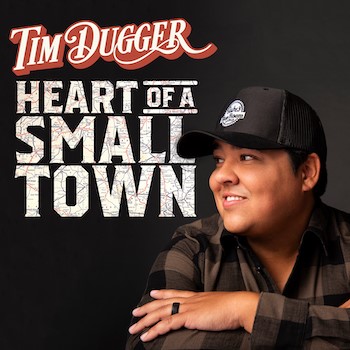 The descriptive song, which he wrote with Brandon Hood and Tim Nichols, depicts Small Town USA down to its one stoplight and lone church steeple. Dugger even pays tribute to the late Joe Diffie with a nod to ‘John Deere Green’.

Like lightning bugs in a mason jar, he captures the red, white and blue magic of the South with a richly textured track full of guitars, drums and fiddles, produced by Hood.

‘Heart of a Small Town’ is the NASCAR enthusiast’s first taste of new music following his MCC/Curb Records debut, Signs of a Good Time.

Curb Records recording artist, singer/songwriter, and Alabama-native Tim Dugger grew up on NASCAR racing, Gospel singing and classic Country music. He developed a genuine love for songwriting and storytelling during summers spent at his local music store jamming with bluegrass pickers. After being introduced to former NASCAR driver and team owner Richard Childress, Dugger was off to the races, playing his original songs at nearly every major track in America. Along the way, he cultivated an unapologetic artistic identity, rooted in the music of his childhood idols like Merle Haggard, Vern Gosdin, Hank Williams, and Alan Jackson. Tim made his Grand Ole Opry Debut in December of 2021. Dugger’s six song EP, Signs of a Good Time, produced by Dan Huff protégé Brandon Hood is available now.