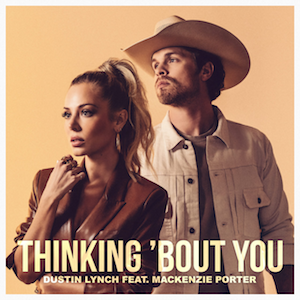 Surpassing the four-week #1 mark set by 2017’s “Small Town Boy,” “Thinking ‘Bout You” is once again sitting atop the Billboard Country Airplay chart this week (10/1/22) for its sixth week, making history joining the company of iconic singles such as “It’s Your Love” by Tim McGraw and Faith Hill, “How Forever Feels” by Kenny Chesney, and Lonestar’s “I’m Already There.” The chart-ruler has also racked up over 191 MILLION on-demand streams to date.

The Lynch, Andy Albert, Hunter Phelps and Will Weatherly co-write is Lynch’s eighth #1 at Country radio overall – as well as his third career chart-topper as a songwriter – and also gives Porter her first US #1 after four Canadian hits. With this single, Porter also joins the select group of Faith Hill, Taylor Swift, and Carrie Underwood as the only female Country artists to achieve this 6-week consecutive #1 accolade on the Billboard Country Airplay chart.

“‘Thinking ‘Bout You’ is a six-week #1 single at Country radio – that’s WILD y’all,” shares Lynch. “What a way to enter 2022! I’m excited to keep this momentum going, and to celebrate all year long. Thank you to all my friends and supporters at Country radio. I’m beyond thankful for everyone that’s worked so hard to make sure this song has the life it deserves.”

Looking ahead, Lynch and Porter will celebrate their airwave reign with a “Thinking ‘Bout You” performance on ABC’s Good Morning America on January 19th – and soon, the Tullahoma, TN, hitmaker will be making another big announcement.

Since then, he’s shared a series of new tracks alongside “Thinking ‘Bout You” including “Not Every Cowboy,” and “Pasadena,” plus even more collaborations like “Huntin’ Land (feat. Riley Green)” and “Tequila On A Boat (feat. Chris Lane).”

MACKENZIE PORTER – Canada native, Nashville-based MacKenzie Porter is rising to international acclaim with her radiant Country style. She recently scored a SIX-week #1 with Dustin Lynch collaboration “Thinking ‘Bout You,” earning her first #1 at U.S. Country radio while releasing brand-new songs “Coming Soon To A Bar Near You,” “Pickup,” “Unlonely Me” and “Heaven Heard Me” via Big Loud Records. Her “mesmerizing vocals and hook-driven songs” (Billboard) off her Joey Moi-produced album DRINKIN’ SONGS: THE COLLECTION sparked headline-worthy accolades, including debuting on the Grand Ole Opry, four 2021 CCMA Awards nominations, and 2021 JUNO Awards nomination for Country Album of the Year. Making her mark, Porter became the first female artist to have three consecutive #1 singles at Canadian Country radio in 22 years with “About You,” “These Days” and “Seeing Other People” in early 2020, following Shania Twain in 1998. Porter also earned her first crossover Top 10 at Canadian Pop radio – a first since 2003 for a Canadian Country artist – with “These Days (Remix),” and joined CMT’s elite Next Women of Country class of 2021. The Pandora 2021 Country Artist to Watch will join Walker Hayes’ FANCY LIKE TOUR in 2022. She has previously shared the stage with Jordan Davis, Kenny Chesney, Rascal Flatts, Chris Lane, Blake Shelton, Dallas Smith, and co-starred in the Netflix series, Travelers.