ALL TIME LOW – Live at The Garage 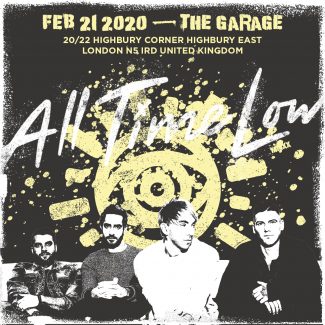 After building anticipation for new music and selling out tour dates across North America, All Time Low have announced that they will release their new album, WAKE UP, SUNSHINE, on April 3 rd on Fueled By Ramen.

This Thursday, February 20th , All Time Low will world premiere ‘Sleeping In,’ a brand-new single from ‘Wake Up, Sunshine’.

The track is set to debut at 2:00PM GMT on Scott Mills’ BBC Radio 1 show. Furthermore, the band have announced that they will be heading across the pond for a pair of underplays at London’s The Garage on February 21 st and Leeds’ Brudenell Social Club on February 24 th . UK fans who pre-order WAKE, UP SUNSHINE or register at the band’s official store by 4:00PM GMT on Wednesday, will receive a code to get first access to tickets: https://smarturl.it/ATL-FirstAccess.

Last month, All Time Low released ‘Some Kind of Disaster’ alongside an official music video, which immediately heightened excitement for WAKE UP, SUNSHINE among fans and press. Within a month, the song has already clocked up over four million streams. The group went back to the basics (and the basement) for WAKE UP, SUNSHINE. Throughout 2019, the four musicians—Alex Gaskarth [vocals, guitar], Jack Barakat [guitar, vocals], Zack Merrick [bass, vocals], and Rian Dawson [drums]—congregated together in Nashville at Rian’s studio and at a Palm Springs rental house.

Face-to-face, they wrote and recorded the 15-song affair joined by co-writer, producer, and collaborator Zakk Cervini. “We got back to how we started,” commented Alex. “It had been a long time since the four of us made a record under one roof. That became a central theme. We’ve been a band for 17 years. Everybody brought something to the table. A lot of what you’re hearing came from those magic moments together.” Jack concurred, “I think we accomplished something special. By putting our four heads together, we were able to make a classic All Time Low album.” WAKE UP, SUNSHINE distills two decades of experience into a definitive and dynamic body of work for the band. Welcoming new collaborators into their world, the forthcoming album sees All Time Low teaming up with blackbear on ‘Monsters’ and The Band CAMINO on ‘Favorite Place’ [album art / tracklist below]. Throughout a back catalogue streamed nearly half-a-billion times, All Time Low have continually raised the bar.

Since the release of their third album, ‘Dirty Work’ in 2011, the group have had four straight Top 20 entries on the UK Official Album Charts, with 2015’s ‘Future Hearts’ debuting as a #1 album. 2009’s ‘Nothing Personal’, 2012’s ‘Don’t Panic’ and 2015’s ‘Future Hearts’ are all UK Certified albums – gold, silver and silver respectively, in addition to their two gold albums, two gold singles and platinum single accolades at home in the US. After nearly two decades together, All Time Low have rekindled the spark they first ignited in a Baltimore basement on their 2020 full-length studio album, WAKE UP, SUNSHINE. These four lifelong friends walked into a tiny room, plugged in, and turned up with the same spirit, but with more experience, and proficiency gained from performing to millions worldwide. As a result, they‘ve delivered WAKE UP, SUNSHINE, a captivating body of work at the apex of their prowess.