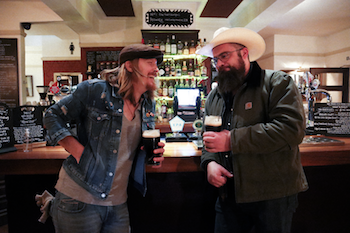 Kenny Foster has collaborated with his friend and fellow artist from across the pond, Ags Connolly, to record their new version of the New Year’s Eve classic, ‘Auld Lang Syne’ – out NOW.

The pair have shared the stage on multiple occasions in the UK, but for this unique duet they worked with producer Mitch Dane to record their parts remotely due to international travel restrictions throughout the last year. Arguably an unlikely pairing, the Tennessee singer-songwriter’s voice complements Connolly’s gravelly Oxfordshire tone perfectly, bringing a modern, Americana twist to a song that has become embedded in new year celebrations around the world since the 1700s. This version is elevated further by a new arrangement from Mitch and Kenny, and their addition of a new refrain to the song, ‘Once Again’.

“I can't describe the joy I have spending time with Ags,” shared Foster. “I like his voice, his spirit, the way we met, etc. He's the kind of guy you wanna have a pint in a pub with and we've done that many times together at this point. So why NOT put our sensitive melancholy into a proper reflectively nostalgic drinking song to mark another strange New Year? It just makes sense. I think you'll agree. It feels like something comfortingly normal. Something strangely, hopefully, normal.”

‘Auld Lang Syne (Once Again)’ is out now – stream/download here.

Ags Connolly is a traditional country artist from England, considered to be one of the best country singer-songwriters ever to emerge from the UK. Described by Country Music People – the longest-running country music magazine in the world – as “a national treasure”, Ags’ third album Wrong Again was released in November 2019. It was named Album Of The Year at the UK Country Music Awards in 2020. The Oxfordshire native is a constant presence on the UK and Europe touring circuit, sharing stages over the years with the likes of Rosanne Cash and Dale Watson whilst continuing to defend the last outpost of the genre’s traditional roots.

Kenny Foster is a Nashville-based country/Americana singer-songwriter who has been steadily gathering critical acclaim, at home and abroad, since the independent release of his first full-length album Deep Cuts in 2017. Named one of Rolling Stone’s “Top 10 Country Artists You Need to Know” and sharing the stage with such diverse acts as Kacey Musgraves, Patty Griffin, Lady A, Maren Morris, Buddy Miller, Old Dominion, Jim Lauderdale, Brothers Osborne, and Lori McKenna, Foster has certainly blazed his own path touring 120,000 miles and 13 different countries in 2019 alone, including multiple performances at London’s C2C Festival.