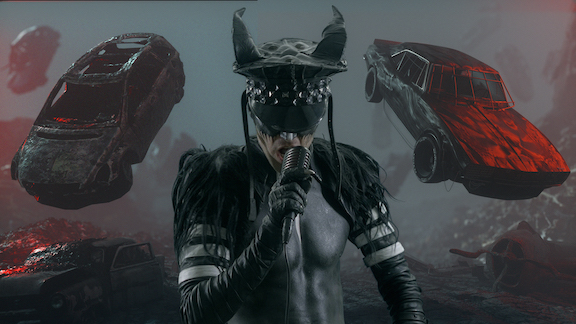 With the looming retail holiday quickly approaching, Los Angeles’ industrial metal outfit, ODDKO, has returned with a new single, “Siren Song,” that takes aim at consumerism and the senseless cyclical compulsion to buy, waste and repeat.

Commenting on "Siren Song," Bucci states: "'Siren Song' is an observation on how our consumerist society has tricked us into believing that accumulating a mass amount of products equates to a better life. We’ve been deceived by salespeople to believe that we must consistently buy new products - albeit these products often being produced to a subpar standard, henceforth forcing us into a cyclical system of repurchasing, which results in a large amount of it sitting in landfill, polluting our planet - to stay relevant within society. This leads to us overworking ourselves in order to indulge our materialistic habits, therefore, causing us to buy these products with not only our money, but with our life too.

The track’s title and theme is inspired by the Greek Mythology tale of Odysseus and the Sirens. This is a story in which a man falls under the beguiling spell of the Sirens, whose sole intention is to lure innocent sailors to their early graves for their own benefit. The Sirens represent distraction and deception; two tactics that eerily mirror those used in modern day commercialism. 'Siren Song' is a criticism of consumerism, so releasing it on Black Friday, a day that’s arguably the epitome of consumerism, felt like a natural fit. After hearing this track, we hope some people ask themselves, “do I really need this? How many working hours of my life will it cost me?”. That simple line of questioning will surely help your pockets, your life and the environment. Humans are powerful; it’s time we push materialism out of the driver's seat and take the wheel ourselves."

ODDKO is an LA-based independent alternative/industrial metal band spawned from the mind of Giovanni Bucci, who started the band as a way to fully express himself in all dimensions, using the music to fuel the images and then feed back into the music.

The soundscape is influenced by metal, alternative, classical, electronic, and cinematic music. ODDKO’s music videos are directed by Giovanni, driven by his sick imagination, his expertise as a filmmaker, and the tools and talent of his production company, Void N’ Disorder.

Their debut EP, “Digital Gods” was written and composed by Giovanni, and for the initial recording he tracked guitars, bass, and electronics, and programmed drums. Subsequently he recorded the tracks with the help of Francesco Paoli (Fleshgod Apocalypse) and Dave Tavanti (Kpanic). Production and recording of cellos, violins, drums, bass, guitar and various arrangements were orchestrated by Daniele Marinelli. The final magic touches were applied in Los Angeles with the help of producer/sound engineer Rob Romano, and the EP was mastered by Howie Weinberg (Rammstein, Madonna, Metallica).

The groundbreaking video for “Disobey”, with over two million YouTube views, won many awards, including Best Metal and Horror Video at the LA Music Video Awards, as well as both Silver and Bronze Telly awards, while the video for “D4TM” won LA Movie Awards in five different categories: Best Music Video, Best Production Design, Best Editing, Best Cinematography, and Best Costume Design. ODDKO has received acclaim from the likes of Metal Injection, Consequence of Sound, Revolver among many others.

Known for their infectious blend of visuals and sounds ODDKO continues to build a fervent fanbase with each release. “Siren Song”  released November 26th worldwide.