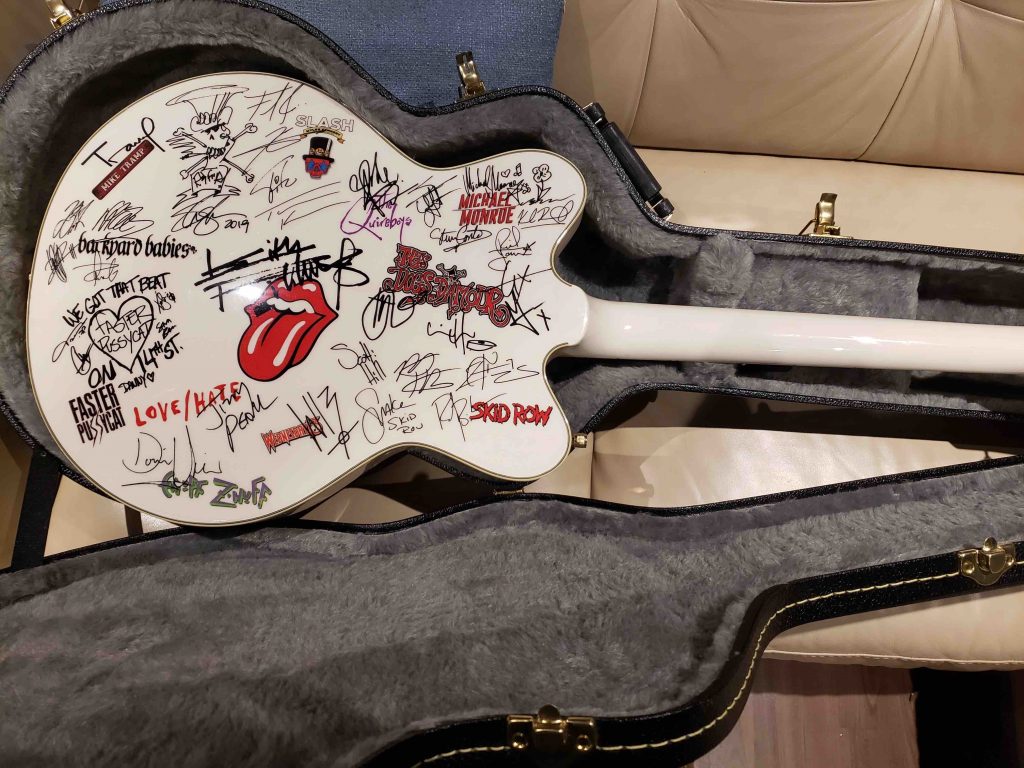 Rock musicians including Keith Richards, Slash, Myles Kennedy, Michael Monroe, Taime Downe, and Jizzy Pearl have come together and signed a unique Gretsch guitar, hand-painted by TylaJ Pallas, to raise funds for New York Dolls’ legend Sylvain Sylvain who has been undergoing cancer treatment in the US.

In April 2019 New York Dolls’ guitarist Sylvain Sylvain confirmed that he had been diagnosed with cancer, was undergoing treatment, required further surgery and would be unable to work for some time. As an original member of the New York Dolls, who had inspired a generation of rock musicians, this was devastating news to many within the rock community. Given the costs of medical care in the US, a Go Fund Me page was set up and fans of the New York Dolls, including musicians, have been donating and raising funds to support him. To date $69,860 out of the $80,000 target has been raised.

In the UK an idea was born. One of our own legends, Tyla (of Dogs D’Amour fame) and his friend/business partner, Alan Hampton (at whose bar both Sylvain Sylvain and Tyla had played in recent years), decided they wanted to do something. Alan had the idea of buying a Gretsch guitar, as played by both Sylvain and Tyla, getting Tyla to paint it and then auctioning it off to raise money. Tyla went one stage further, sourced a new guitar generously donated by Mike Taft at Gretsch, hand painted an original New Yorks Dolls design on it and asked his friends within the international rock community to sign it. And they did … and then some.

The painted guitar (a new Gretsch Electromatic) is stunning. A unique one-of a kind piece of rock memorabilia that reads like a Who’s Who of 80’s and beyond debauched rock music in all it’s finest glory. A full list of the artists who have signed the guitar (along with images of the guitar) can be foundat the foot of this release.

“I was gutted when I heard about Sylvain. Cancer’s horrific for anyone, but most musicians struggle to get insurance and in the US it’s even worse. The Dolls inspired so many of us and we just felt we wanted to do something. It was Alan’s idea. The least I could do was do one of me paintings on it and get in touch with a few old mates. I never expected so many to get involved. It’s great, innit? We’ve set a reserve, but to be honest I hope it’ll go for a lot more and it may come close to helping him hit his target. He’s almost there”.

Due to the logistical difficulties, the cost of shipping the guitar around the world and the tour schedules of those who wanted to contribute, Tyla and Alan’s plans nearly didn’t happen. But, not to be put off, an alternate plan was conceived involving another musical contact of Tyla’s – this time in Canada. Bruce Hotchkies, The Deadly Romantics, has a specialist printing business, and all artists wishing to sign the guitar would provide authenticated hand written signatures which would then be process-printed on to the back of the guitar, and the hand written signatures would be included along with the guitar and case when auctioned. To enable this to happen the signatures made their way across the Atlantic.

“I’ve been a huge fan of punk, rock and particularly the Dolls for years. I also put on some music and I’ve been in the amazing position of having had both Sylvain and Tyla, along with other acts, play 10 Bar in recent years. I felt I wanted to do something, spoke to Tyla and it took off from there. It’s been great to see the rock community come together like this and want to pay back to one of their own”.

Amongst the signatories is a fellow New York Doll, Steve Conte (guitarist, Michael Monroe Band, and solo artist), who said,

“I have spent many years with Sylvain, living in NYC, writing songs and playing in the New York Dolls together and I can honestly say – this guy is a national treasure. It’s heart warming to see that so many of these other great musicians who I know and play with have signed the guitar for Syl as well. Thank you all”

The auction will take place on ebay.co.uk[ https://www.ebay.co.uk/itm/223904966300]. The item will include the one-off guitar, guitar case and the original handwritten signatures. Given the charitable nature of the item, and it’s value to those in the rock community, a reserve of £3000 has been set.

Tyla’s Dogs D’Amour have also recorded a cover of the New York Dolls’ classic “Pills” (featuring Rich Jones (guitarist, Michael Monroe Band) and Alan Hampton (formerly guitarist, Courtesan) available to purchase and download from https://songforsyl.bandcamp.com/. All proceeds from this will also be donated to the Sylvain Sylvain Go Fund Me campaign. People can donate as much as they want when they download the song.