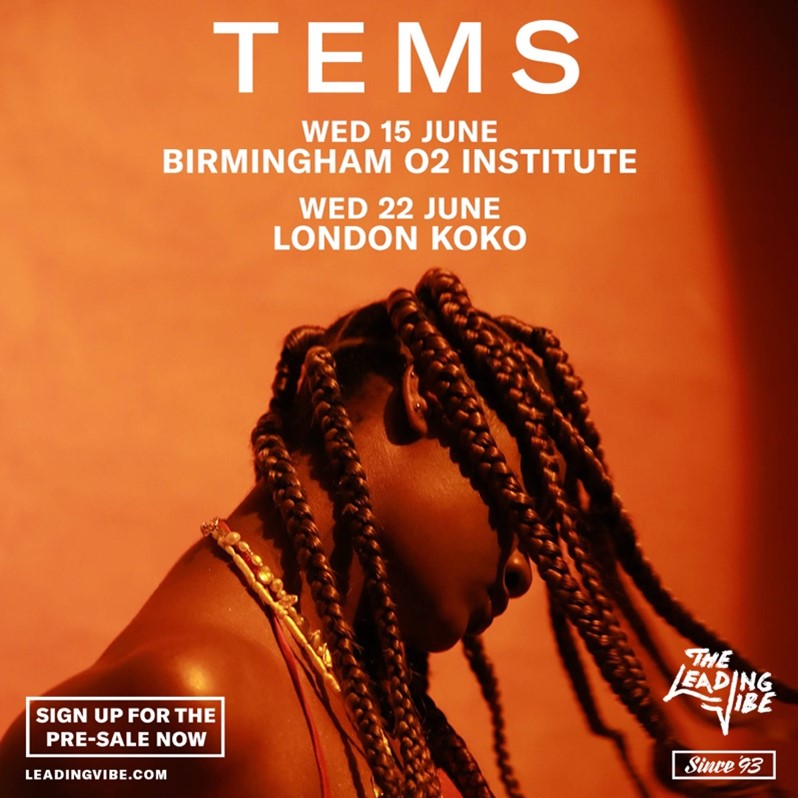 350m audio streams. A billion worldwide video views. A platinum record for Essence, her collaboration with Wiz Kid, and most recently an MTV EMA nomination for Best African Artist…The list of accolades that Nigerian singer, producer & songwriter Tems has achieved in a short space of time could go on and on.

Now, just over a month since the release of her rapturously received sophomore EP If Orange Was a Place, Tems announces two June 2022 UK headline shows at Birmingham’s O2 Institute and London’s KOKO. Pre-Sale will be available via See Tickets at 10AM BST this Wednesday while General On-Sale can be purchased on Friday 29th October.

In September of 2020, Tems released her critically acclaimed debut EP For Broken Ears, instantly hitting No.1 on iTunes in five countries across Africa. Flash forward twelve months later and her undeniable talent has led her to become a truly global phenomenon. In America, she appeared on fan favourite Fountains from Drake’s new album Certified Lover Boy, made a stunning US TV debut on Jimmy Kimmel Live! and sold out shows in NY, Atlanta, Chicago and LA. Meanwhile, Essence became the official song of the summer as the track peaked on the Billboard 100 Top 10, became the most Shazamed song in the country, was remixed by Justin Bieber and became the first song written by Nigerian artists to hit No.1 on Urban Radio.

On this side of the Atlantic, the track hit the OCC Top 20 while the profound sincerity of her song writing has resulted in her being named as BBC Radio1’s Future Artist of the Month for October and Apple Music’s Global Up Next Artist. With two tracks from If Orange Was A Place currently on the BBC B-List simultaneously, high profile fans including Adele, Dave & Stormzy amongst many others and three highly-anticipated London headline dates at Lafayette that sold out within five minutes, Tems’ immensely striking talent is quick establishing her as the world’s next superstar.

If Orange Was a Place is available to stream/purchase on