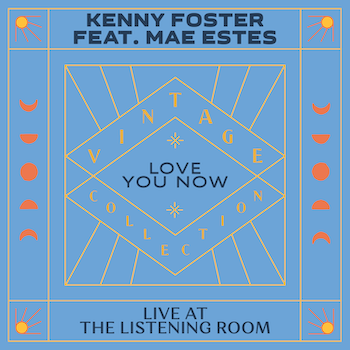 After a year of uncertainty where chance encounters were few and far between, this story-style song chronicles a rare run-in with an object of unrequited love, taking the listener on a roller coaster of emotions. The song has been a fan favourite at live shows for some time, and having been featured in many songwriter rounds at The Listening Room in Nashville, TN, the venue was chosen as the location to record the video, released on Friday (15/10) following a premiere on CMT, with a live version of the song available to stream/download now.

The live version of ‘Love You Now’ is the fifth and final track to be featured in Kenny Foster’s Vintage Collection, a collection of previously unreleased songs that could only be heard at live shows. In the absence of touring, Foster decided to release these songs directly to fans so they could enjoy them at home over this last year. Previous Vintage Collection releases include ‘Space’ (August 2021) co-written with Sarah Jane Nelson and produced by Chris Rafetto, featured on Nashville Stripped and Fresh Finds: Country; ‘It Don’t Work Like That’ (May 2021) co-written with Melissa Fuller and produced by David Hodges, appearing on several Spotify playlists including Country Coffeehouse, Nashville Stripped, Fresh Finds: Country, and Young Nashville; ‘Lonely Land’ (Feb 2021) co-written with Mando Saenz and produced by Mitch Dane, which found a home on the Fresh Folk Playlist and the studio version of ‘Love You Now’ (Nov 2020), a duet with Mae Estes and produced with Chris Rafetto, landed a spot on Next From Nashville.