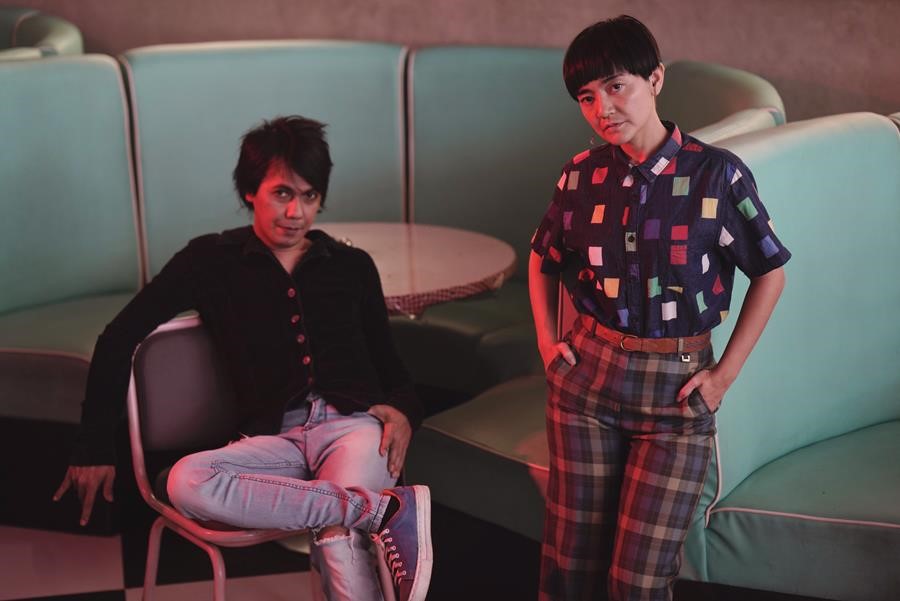 It premiered yesterday at Pop Matters, who said:“[Any Day in the Park] offers us a glimpse into the boundless imagination of Stars and Rabbit through the simple act of going outside” and continued “…with surreal visuals both blissfully soft and grand and sounds as tremendous in scale as they are sweetly simple, Stars and Rabbit make the mundane miraculous”.

The joyous track is accompanied by a video directed by Bona Palma, that sees Elda and Didit whisked into colourful adventures. “Any Day In The Park” is taken from their upcoming second studio album “Rainbow Aisle” due for release February 28th on Green Island Music.

Regarding the story behind the song, Elda says, “the track is about me enjoying all aspects of being in the park”, and Didit continues, “Wherever and whatever circumstances we are in, sometimes all the comfort you need is space for your own thoughts.“

Earlier in the year, Stars and Rabbit released the brilliant single “Little Mischievous”. The infectious track was accompanied by a video directed by Agung Pambudi. The track was picked up internationally by the likes of VICE (ID), Spincoaster (JP), Billboard (ID), Rocktails (AR) and many more.

On the writing process behind “Little Mischievous”, Elda says, “I’ve always wondered how far my creative mind can go when I’m exploring different musical paradigms. On this record, it feels like meeting a me I’ve never known. Luckily, Didit can connect me to that musical wilderness. “Little Mischievous” captures all that.”​

Of his own process, Didit has said, “When we get bored with life’s routine, sometimes wild ideas pop-up that make us feel more alive.”

On the themes in the video accompanying “Little Mischievous”, Didit has said to him it speaks of the idea that “there’s another ‘me’ in everyone, if only people looked in the right way. I think people would surprise themselves”, while Elda suggests it simply being “a slight reminder that everybody can access their inner child anytime they want to – just make sure no one is harmed!”

More on Stars and Rabbit:

Originating from Yogyakarta, the band formed in 2011 and have been on the rise ever since, releasing an EP, multiple live records, a collaboration with the group Bottlesmoker, and their debut album “Constellations” in 2015. In 2017 their single “Man Upon The Hill” was released to critical acclaim, with The Line Of Best Fit describing it as “…a truly spectacular piece of forward-thinking folk” whilst the video for it was nominated for Best Pop Video Newcomer at the UK Music Video Awards.

2019 saw a shift for the group, with original guitarist Adi Widodo making the decision to leave the band and previous producer for the group, Didit Saad, taking his place alongside Elda Suryani to form the new Stars and Rabbit. Saad worked closely on the “Constellations” album as their producer, and has been a constant presence throughout their rise so it made perfect sense for him to join after Widodo’s departure.