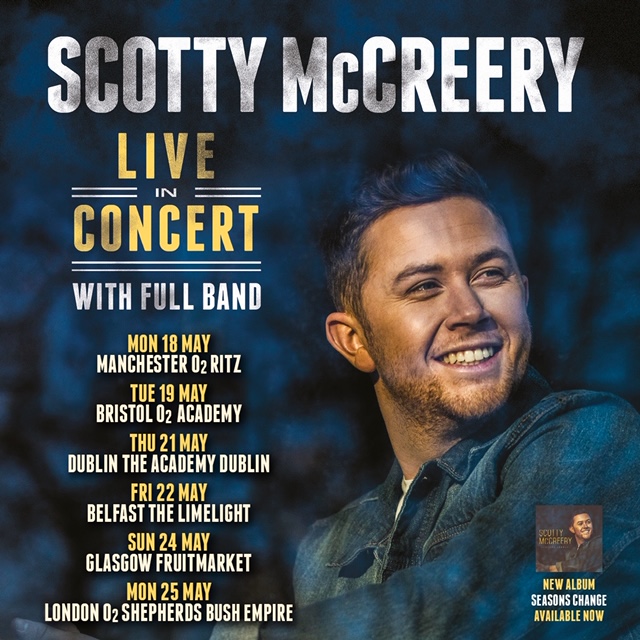 Multi-Platinum country music artist Scotty McCreery, who has gained fans around the globe and earned two No. 1 hits in the United States with “Five More Minutes” and “This is It,” will return to the UK this May on the heels of his sold-out acoustic tour in England and Germany last October.

Scotty will return to both London and Manchester, but due to popular demand, the singer/songwriter will also hold his first concert in Glasgow. In addition, McCreery will be bringing his full band with him for the first time, and playing larger venues, making these his biggest solo international shows outside the US to date.

Can you possibly ask for any more……STOP THE PRESS…. you don’t need to, Scotty has just announced two additional shows in Dublin & Belfast due to demand.

Tickets will go on sale beginning this Friday, Feb. 21st, at 9:00AM GMT at www.ticketmaster.ie.

“I am beyond excited to come to Ireland and Northern Ireland this year. We’ve had tons of requests from fans there asking when we were coming. I’m happy to say we’ll be there in May, so come out and see us!” said McCreery. “In addition, the McCreerys are of Irish lineage, so I can’t wait to visit my ancestral homeland.”

Last October, McCreery’s London show at Bush Hall sold out within minutes of going on sale, prompting a second show to be added which also sold out quickly on the first day of sales. In order to satisfy fan demand for his May appearance, McCreery will perform at the larger O2 Shepherd’s Bush Empire.

In October 2019, McCreery held concerts in Europe for the first time with tickets selling out in minutes for his tour dates throughout England and Germany, with two shows in London at Bush Hall, one show at Manchester’s Academy 2, one show in Berlin at PrivatClub, and one show in Cologne at Helios 37.

The ACM and CMT Award-winner is currently closing in on the Top 20 of both the Billboard and Mediabase / Country Aircheck US country airplay charts with his current single “In Between” from the No.1-debuting album Seasons Change. After touring with Old Dominion at the end of last year and performing at Luke Bryan’s Crash My Playa event in Cancun, Mexico in January, McCreery will join Chris Young on the road later this spring and summer for the “Town Ain’t Big Enough Tour.” The Triple Tigers/Sony recording artist recently released his first digital-only EP, The Soundcheck Sessions (listen here), which features acoustic renditions of his hits “Five More Minutes,” “This is It,” “In Between” and the fan-favorite “Still.”

Check out the new acoustic video for ‘Five More Minutes”

ABOUT SCOTTY MCCREERY:
McCreery, whose current single is “In Between,” achieved new heights by earning two back-to-back No. 1 hits from his most recent album Seasons Change, which debuted at No. 1 on the Billboard Country Album chart: the RIAA Double Platinum-certified “Five More Minutes” and the RIAA Platinum-certified “This is It,” which stayed at the top of the charts for two weeks. He co-wrote all 11 songs on Seasons Change. All four of his albums have debuted at No. 1 on a Billboard Albums chart, with current combined sales surpassing 3 million copies. He’s earned one Double Platinum, four Platinum and one Gold singles; won the 10th season of “American Idol” in 2011; was named the ACM New Artist of the Year in 2011; won the CMT Music Award for Breakthrough Video of the Year (“The Trouble with Girls”) in 2012; American Country Awards for New Artist of the Year in 2011 and Breakthrough Artist of the Year in 2013; BMI Awards for writing One of the Top 50 Country Songs of the Year three times (in 2015 for “See You Tonight,” in 2018 for “Five More Minutes,” and in 2019 for “This is It”); a Carolina Beach Music Award for National Dance/Shag Song of the Year (“Barefootin’”) in 2018; and the NSAI Nashville Songwriter Award for One of the Top Ten Songs I Wish I’d Written (“Five More Minutes”) in 2018. The North Carolina native released his first book, Go Big or Go Home: The Journey Toward the Dream, in 2016; it was recently re-released in paperback in 2020. McCreery launched his recording career by making history in 2011 as both the first country artist and the youngest male artist of any genre to debut his first studio album, the Platinum-certified Clear as Day, at No. 1 on the all-genre Billboard Top 200 Albums chart.

For more information and his current tour schedule, visit  ScottyMcCreery.com.