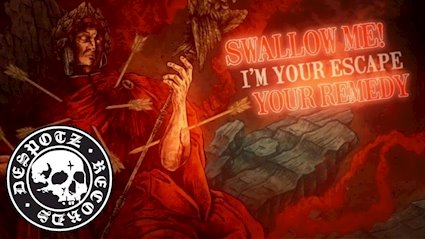 Nightrage is here with a new brutal lyric video for the song ‘Swallow Me‘ that will be on the upcoming album.

In 2021, the Greek/Swedish melodic death metal stars Nightrage return with the final part in their trilogy of albums (‘The Venomous’, ‘Wolf to Man’) and now complete with their upcoming album ‘Abyss Rising’. An album that is the band’s vision of mankind living in its own hell – a hell it has created through the destruction of the planet. Inspired in part by Dante’s ‘inferno’, the album explores man’s continual destruction of the world we live in until the abyss opens up to consume all before it.

The abyss has risen from the depths, and hell has now turned outside in to be able to rise to earth to claim us. The album captures Nightrage in a spectacular form; incisive, brutal, uncompromising, and unforgettable. Musically the band have embraced a harder, faster, and brutal approach, still rich in melodic intent but characteristically heavy and aggressive. Mixed and mastered by Fredrik Nordstrom at Studio Fredman (Architects, In Flames, Opeth, etc.) ‘Abyss Rising’ is a formidable sonic masterpiece.

Marios and Dino about the new lyric video: ‘Mine and Magnus Guitar musical chemistry is really obvious here once again, blending a lot of different ideas that comes always from jam sessions, and focused on melody and hooks. We love to mix all these elements and add a lot of drama creating an amalgam of hooky riffs, brutal vocals, guitar harmonies and melodies into our songs, and “Swallow Me” once again is a great example of that! Ronnie talks this time about how our society have lost control and let religion guide us into false beliefs. This song is about religion. How we humans create a false belief in false gods to hide our own evil deeds behind. And religion is like a virus in our minds and in our society that grows bigger and bigger out of our own control.’ // Marios

Well, If anyone asked a Nightrage fan to describe the band with one single word, I am sure he would answer ”MELODY”. The same word describes ‘’Swallow me’’. Melodies blended with Heavy Metal riffs and strong Death Metal elements. It was really fun to record this song, as it’s obviously based on groovy parts and old-school heavy riffing. If you notice, my drum-parts have a really strong bonding with the rhythm guitars and bass. That, of course, was made in purpose, as I feel that with more simplicity on the drums, I am giving more space for the melodies to shine, as it was meant to be.’ // Dino