Not Made For Settlin’ Down – Ashland Craft 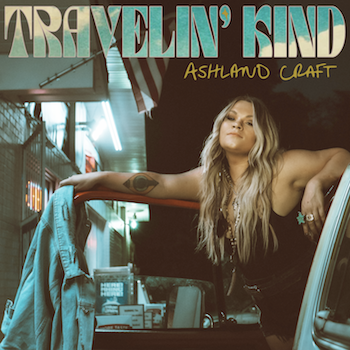 Ashland Craft ain’t looking in the rearview as her debut album, TRAVELIN’ KIND, rolls yesterday (4/9) on all streaming platforms and digital retailers.

“TRAVELIN’ KIND feels like the start of a whole new adventure. It’s a heartfelt, wide open track list (written with some of my very best friends), that takes you through all the ups and downs that come along with life’s journey,” shares Craft. “I wanted it to be rooted but carefree, and a little imperfect – which I feel like Jonathan Singleton captured perfectly while producing my debut record. My dreams are becoming a reality and I can’t wait to hear what songs fans resonate with!”

Roaming free and easy with all songs intersecting, TRAVELIN’ KIND is an 11-track introduction to her ramblin’ way of life. Taking a direct route through the heart-and-hustle of a 17 miles-per-gallon grind, it’s an important mile marker for Craft’s rising career as it follows her road-worn one-way ticket to Nashville, TN, and all the tour stops, truck stops, and broken hearts in-between, after relocating from her hometown of Piedmont, South Carolina, in 2019.

“I wasn’t made for the settlin’ down / In a white picket fence water tank town / I got a soul like a black crow flyin’ / I guess I always been the travelin’ kind,” she sings in the bold title track and wild-at-heart manifesto. As one of nine songs all co-penned by Craft, the Jonathan Singleton-produced collection features a heavy-hitting, GRAMMY-nominated songwriting crew including Singleton, Jessi Alexander, Jessie Jo Dillon, Rodney Clawson, and Wyatt Beasley Durrette, III, alongside her close friends and rising talents like Faren Rachels, Rob Snyder, Lee Starr, Willie Morrison, Reid Isbell, and Jenna LaMaster