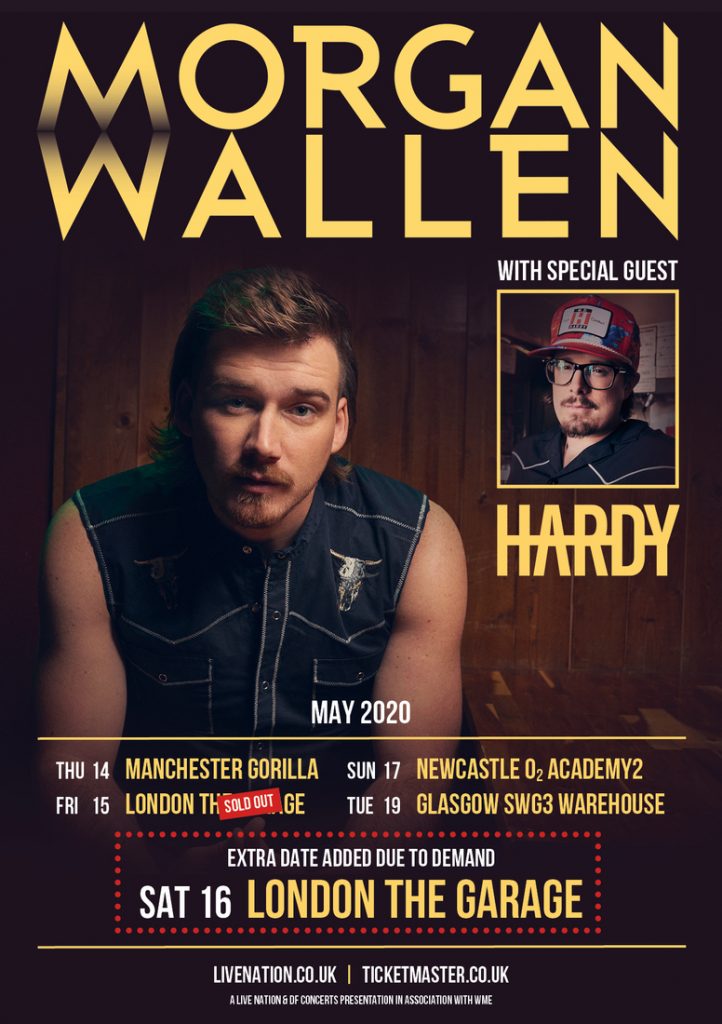 Due to overwhelming demand Morgan Wallen has announced an extra London date to the tour.

One our favourite country artists at the moment and at just 24 years old Morgan is the blue eyed baby of country music. Whiskey Glasses and Up Down have been constants on our playlist and have already cemented themselves as new country classics.

Hot on the heels of his sold-out U.S. headlining run and a nationwide direct support slot on Jason Aldean’s WE BACK TOUR, Big Loud Records star Morgan Wallen will bring his talents and raved-about live show across the pond for his first European headline run, featuring five UK shows. Check out the video for current single ‘Chasin’ You’, taken from debut album If I Know Me here: https://www.youtube.com/watch?v=iBduQb1S-4s.

“I can’t wait to get over to the UK for my first time ever,” shares Wallen. “I’ve always heard how amazing the fans are over there – looking forward to experiencing it for myself. Y’all get ready for a good time!”

The tour, promoted by Live Nation, launches May 14th at Manchester’s Gorilla, with Wallen bringing longtime collaborator and friend HARDY along for the ride. With Top 25 debut single “Rednecker,” and four Platinum-certified #1 singles as a songwriter under his belt – alongside upcoming state-side touring runs with Cole Swindell and Thomas Rhett – the rising singer-songwriter adds to his resumé with the international stint.

Last Friday (Jan 31st), Wallen released a new version of Platinum-certified Diplo collaboration “Heartless,” adding Julia Michaels to the mix and pairing it with a fiery new music video, directed by Brandon Dermer and shot in Nashville, WATCH HERE. Wallen is in the studio now working on his second album with producer Joey Moi, expected for release in 2020.

ABOUT MORGAN WALLEN:
With over 1.5 BILLION career streams to his credit, multiple GOLD and PLATINUM certifications and Billboard’s #1 song of 2019 on both the Hot Country Songs and Country Airplay charts (the PLATINUM multi-week #1, “Whiskey Glasses”), Morgan Wallen has officially staked his claim as Country music’s next superstar. The dynamic Tennessee native has been riding a red-hot win streak since 2017, collecting accolades which also include two straight chart-toppers, his first-ever CMA Awards nomination (2019 New Artist of the Year), a nod for 2019 CMT Breakthrough Video of the Year(“Whiskey Glasses”), spotlight placements on PEOPLE’s 2019 Ones to Watch and MusicRow’s 2019 Next Big Thing lists, and high-profile features by The Associated Press, The Washington Post, Genius, and more. While his romantically charged current single, “Chasin’ You,” races up the Country charts, Wallen closed out the decade with the surprise release of his reflective coming-of-age anthem, “This Bar,” and then launched his third consecutive headlining tour – MONSTER ENERGY OUTBREAK TOUR PRESENTS: MORGAN WALLEN’S WHISKEY GLASSES ROADSHOW. The breakout talent is now preparing his second album, expected for 2020 release, and is on the road as direct support for Jason Aldean’s WE BACK TOUR.

ABOUT HARDY:
Big Loud Records/Tree Vibez Music’s HARDY continues to put his loud-and-rowdy stamp on modern Country music as both an artist and a CMA-nominated songwriter (Song of the Year – “God’s Country”). Releasing HIXTAPE VOL. 1, with 17 all-star collaborations (Keith Urban, Thomas Rhett, Dustin Lynch) on 10 brand new tracks, the unprecedented compilation album has been praised as “one of the most ambitious projects of the year” (Billboard). The countrified mixtape follows career-launching EPs THIS OLE BOY and WHERE TO FIND ME, which produced Top 25 debut single “REDNECKER,” the down South, swampy anthem that defines his brand of Country. The pride of Philadelphia, MS, has been named a Vevo DSCVR artist, MusicRow 2020 Next Big Thing artist, and “One To Watch” by CMT, Rolling Stone, Amazon, Pandora and more. As a songwriter, HARDY is “one of Music Row’s most consistent hit-makers on the rise” (CMT), tallying four #1 singles in 18 months – Morgan Wallen’s PLATINUM “Up Down” (feat. Florida Georgia Line), FGL’s 2X PLATINUM “Simple,” Chris Lane’s PLATINUM “I Don’t Know About You” and Shelton’s PLATINUM “God’s Country.” HARDY will join Cole Swindell’s DOWN TO EARTH TOUR in March, and Thomas Rhett’s CENTER POINT ROAD TOUR this summer. His next single, “One Beer,” hits radio airwaves nationwide in February.