The Best Is Yet To Come – Alyssa Bonagura 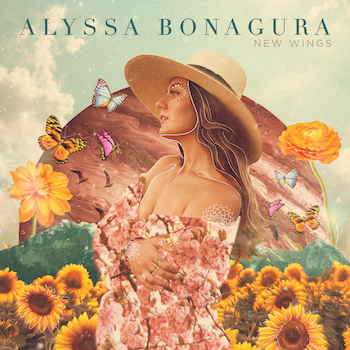 In high demand as a songwriter, Alyssa’s songs have been recorded by a broad range of artists, from Steven Tyler and Jessie James Decker to Sarah Jarosz and Jo Dee Messina; and she shared a release day with UK pop-rock band Lawson, whose new album Cmd Z features three songs she co-wrote, including ‘Killing Me’ which she also provides duet vocals for. Despite this recognition, a series of life changes and the pandemic’s impact on the music industry brought home the importance of finding time to write for herself.

“After losing a lot of things I thought were concrete in my life, I dove into writing solo music again to help me cope,” she shares. “Throughout my healing journey I found a poem by Paulo Cohelo called The Lesson Of The Butterfly that speaks on how the struggle to fly out of the cocoon is one of the most important processes that can’t be skipped. “As difficult as it may feel when it’s happening, those “cocoon moments” throughout our lives are the ones that strengthen our wings so that we are able to fly. That realization really hit home for me & became my mantra of 2020. ‘New Wings’ is about having faith that on the other side of it all, the best is yet to come.”

The single was also one of her first remote co-writes; written over Zoom with producer and songwriter Tawgs Salter, Alyssa describes the process: “He came in with this beautiful musical track, and after sharing our similar feelings on transformation, the song was virtually written and recorded in a couple hours.”

Celebrating her extensive links with the UK’s creative community, having studied music at the Liverpool Institute of Performing Arts (LIPA), Alyssa returned to the city last summer as travel restrictions began to lift, to reconnect with a group of musicians and bring them together to film a twelve-song live set. Filmed and produced by leading event company Adlib, who built a full-scale live production in their Liverpool studio, the shoot was the closest that everyone involved could come to getting back out on the road, a sentiment expressed by Bonagura in the introduction to the project, ‘What Live Music Means To Me’. The next of these videos, a performance of the single ‘New Wings’, will be released on Alyssa’s YouTube channel on July 21st.

Additionally, Alyssa is asking for fans and followers everywhere to share their own experiences through her #MyButterflyStory campaign on Instagram: “Music to me is all about connection, and  throughout the pandemic I got to hear a lot of people telling me why a certain song was helping them get through quarantine and that’s really the reason I do this. I’m hoping that New Wings reaches out and uplifts people who have felt a similar transformation and rebirth – and that’s why I’d love to hear from fans about what struggles they went through to get their #NewWings & share it on that page in hopes to show a sense of unity among people all over the world.” Get involved here: https://www.instagram.com/mybutterflystory/.

Aug 5th – JBL Back To Stage at Between The Bridges, South Bank