A Brick Through The Window – THE LOUNGE SOCIETY 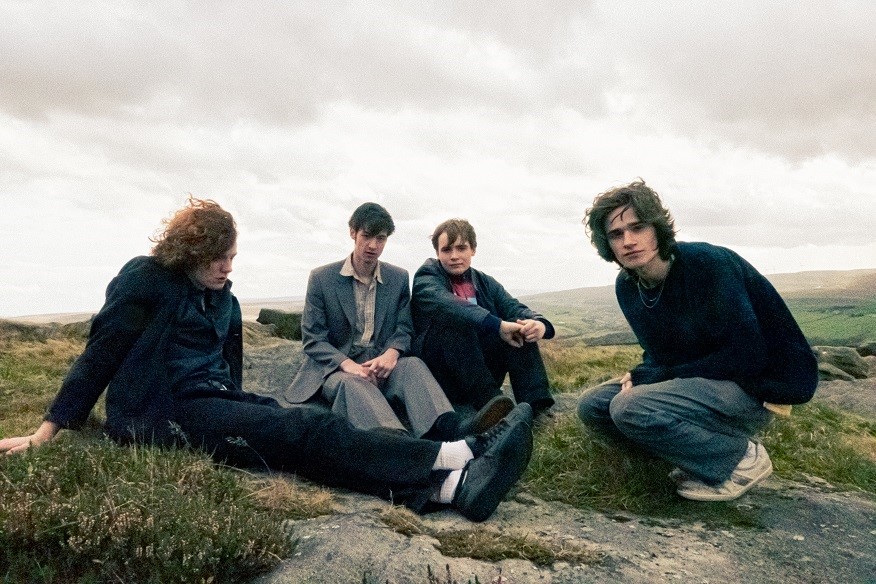 The Lounge Society‘s debut EP Silk For The Starving is out now on Speedy Wunderground. With a run of BBC 6 Music-playlisted singles under their belts – including most recent single “Cain’s Heresy” – the band also have a packed live schedule of UK headline tour dates to come, including support slots with The Cribs and The Orielles.

The Lounge Society – who met at their local high school in nearby Mytholmroyd (otherwise famous as the birth-place of poet Ted Hughes) – explore a raucous sound. It’s a sound shot through with the adrenalized and undeniable youthful surges that informed both proto- and post-punk, with The Velvet Underground, Talking Heads and Fat White Family cited as shared influences. On their debut EP Silk For The Starving there’s a rawness which belies a self-assured songwriting slickness that is almost alarming for four teenagers.

This is music that follows a strong north-west lineage

In tracks such as “Cain’s Heresy” and their pulsing, paranoid reverb-laden debut single “Generation Game” (released as a limited edition seven-inch on Speedy Wunderground in March 2020) there’s a sense of the anthemic too. The latter track, with its “What will the US do?” tag-line was bursting with so many ideas it was split over two sides of the same piece of vinyl. One reviewer remarked on it being a collision of Beta Band ambition, Fat Whites rabble-rousing and early Roxy Music sheen.

'If there was ever a band to come out the corner punching, it's The Lounge Society - They're on for a tear up so get yourselves ring-side'

“Burn The Heather” struts with brittle A Certain Ratio/Tom Tom Club-style funk and takes its title from the annual local ritual burning of the moor-top heather by the rich rural landowners for their lucrative grouse-shoots (and which those down in the valley blame on causing frequent flooding), while also recycling a line from a Lawrence Ferlinghetti poem.

“Our lyrics are a call-to-arms for people who share our dismay at the dismal future being carved out for people like us,” the band explain. “We want each line to be a brick through the window of just the right people.”

Listen to Silk For The Starving in full here.

The complex spikey prog-punk arrangements of “Television” meanwhile, most recall the band for which the song is named, but with the type of ragged groove that Happy Mondays might have stuck on for hours in their early garage days.

This is music that follows a strong north-west lineage whose roots reach deep into Manchester’s past, yet without ever once resorting to nostalgia. It’s future-facing. Elsewhere there’s plenty of sardonic sloganeering akin to Mark E. Smith were he lost in the rolling news of Twitter feeds that tell of corrupt presidents, useless Prime Ministers, race hate, rising debt, online trolls, empty celebrity culture, poisonous ideals and the general sense that the Western world is in a tailspin freefall towards complete disintegration.

Make no mistake, this is the sound of young England: articulate, enraged and energised. And – perhaps crucially – highly danceable too. It should give hope to anyone who has lost faith in the future. The Lounge Society make a strong case for ones to watch through 2021.