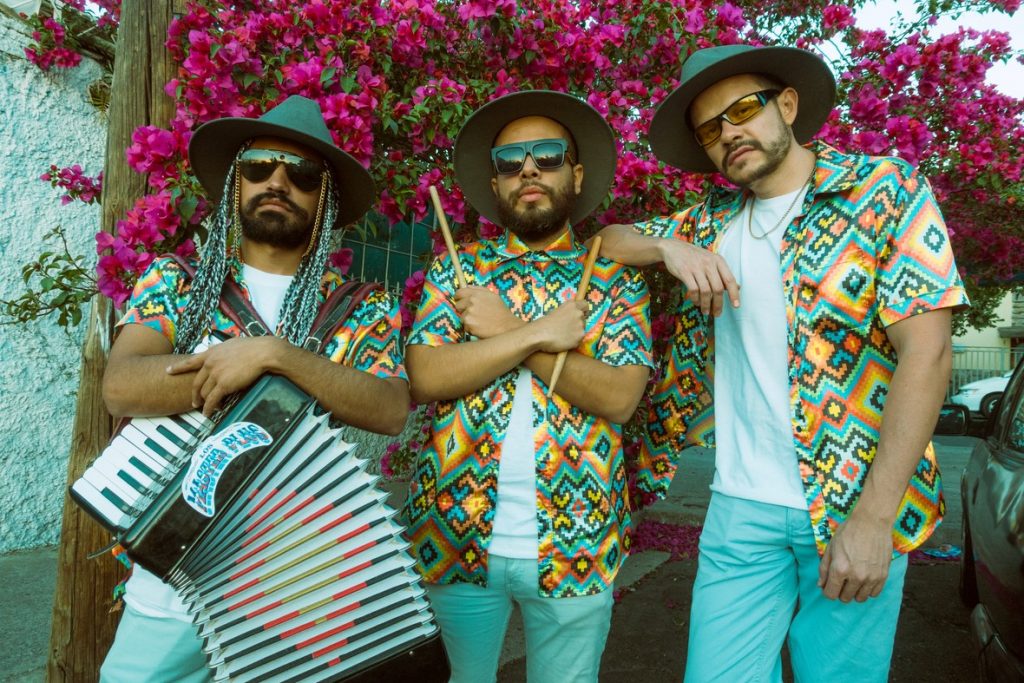 “Los Master Plus proudly present the limited edition “Buena Vida” single in 45 rpm purple and black vinyl. This colorful collectible marks the collaboration with one of their long-time idols and staple in the cumbia community, Pato Machete; from the historic latin hip-hop trio Control Machete.

The track is all about celebrating life and giving value to the little things we take for granted; as well as paying a heartfelt homage to cumbia music showcasing different styles of the genre: the Mexican norteño style can be felt right from the start, intertwining with the more South American feel of it towards the end of the song. The chant “Cumbia Orgullo Latino” calls for and makes a toast to Latin unity under the sound all Latin American countries share that spawned from African rhythms.

Side B features the iconic cumbia cover of Sisqo’s “The Thong Song” that has been heard on all kinds of stages around the world where Los Master Plus have brought their energetic show.”

Los Master Plus was born in the musical city of Guadalajara, Jalisco in 2010. The main idea behind the concept is to generate a new evolution of Mexican popular rhythms by mixing genres and regional elements with rhythms of modern world music. .

From the first live performances, the group quickly began to gain popularity on the internet. Some of their videos went viral, which quickly earned the band iconic status in their industry.

With three EP’s and one LP, the project has been presented live in more than 28 cities throughout Mexico with great success, which has happened on several tours in more than 20 of the most important cities in the United States and other European countries and South America; such as Los Angeles, San Francisco, Las Vegas, Miami, New York, Washington DC, Houston, New Orleans, Chicago, Denver, Austin, Paris, London, Bogotá, Guatemala, Asunción, among many more. The band has shared the bill with artists of international stature such as Maná, Zoe, Molotov, Kinky, Nortec, Celso Piña, Natalia Lafourcade, The Killers, Cartel de Santa, Calle 13, Los Auténticos Decadentes, Bacilos and Café Tacuba, among others. ; and has participated in important festivals such as SXSW, Pa’l Norte, Cumbre Tajín, Supersónico, LAMC, Tequila Sound Fest, Machaca Fest, Revolution Fest, Music Tastes Good, Gozadera Fest, among others.