Love Or Hate Him? – Morrissey 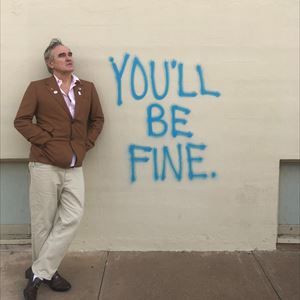 It was officially announced last Friday that Morrissey’s 13th Solo Album and 2nd studio album for BMG Records, ‘I Am Not A Dog On A Chain’, is set to be released on March 20th, 2020.

Now, as part of the next stage of Morrissey’s new album launch, two Morrissey UK arena concerts have been confirmed as well as dates in Cologne & Paris. The first UK date is at Leeds First Direct Arena on Friday, March 6th along with a second show set at The SSE Arena, Wembley in London on Saturday, March 14th. He also plays the Palladium Cologne on the 9th March and the Salle Pleyel in Paris on 11th March.

Tickets to the shows are on sale now.

This new limited run of shows, set to kick off the launch of the ‘I Am Not A Dog On A Chain’ album, promise to be not-to-be missed affairs if reaction to Morrissey’s 2019 U.S. dates is any indication.  Press who covered the U.S. Autumn tour raved about the powerful performances as some of Morrissey’s best ever, while continually commenting on the strength of his “ageless” vocals.

“His pitch-perfect vocals filled the arena with ease and there wasn’t an off note to be heard.”-NBC San Diego 10.15.19

“In fine form and with an excellent voice, Morrissey dramatically captivated the crowd throughout the evening, whipping his microphone cord to punctuate movements and crooning dramatically when appropriate.”- Music Connection 10.11.19

“For nearly two hours Morrissey turned in a spirited performance that culled material from his solo albums, and several covers from this year’s California Son. Far from an aging rocker desperately trying to recapture the passion of his youthful performances, Steven Patrick Morrissey has actually improved. His voice has deepened and grown stronger with age.”   – Riff Magazine 10.4.19

At age 60, Morrissey is the rare singer whose voice is actually getting better with age.”   – Dallas Morning News 9.18.19

“In fine form and excellent voice, Morrissey was every inch a performer, dramatically whipping his microphone cord to punctuate movements and crooning dramatically when appropriate. For a night of deeply intellectual and thoughtful pop music, Morrissey has no peer.” –Parklife DC 9.06.19

LISTEN TO ‘BOBBY DON’T YOU THINK THEY KNOW?’ HERE: https://morrissey.lnk.to/bobbyPR