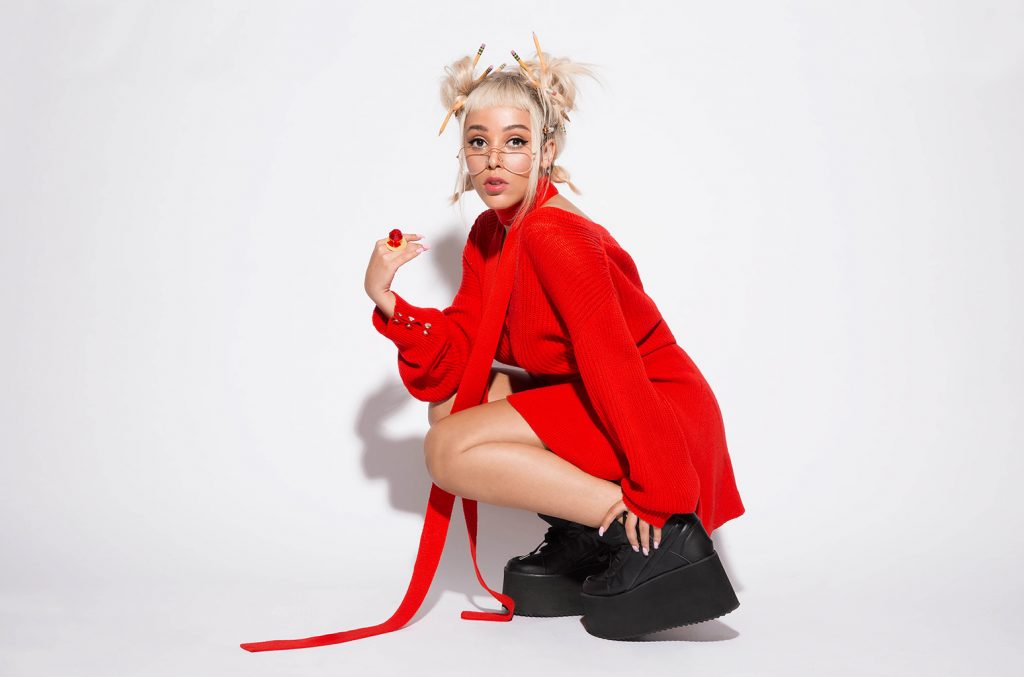 Yes it’s true. Alongside a banging Country mix tape we’ve had Doja Cat on replay all week. I’ve been told to apologise but I can’t because I’m a bitch and a boss and I shine like gloss.

“I’m not perfect, but I always land on my feet. The music speaks to that. It’s so many different things. It’s clunky. It’s poppy. It’s bubbly. It’s cutesy. It’s dark. It’s surprising. It’s trappy-go-lucky with a touch of punk. It’s exactly who I am.”

It’s also the product of a quiet, near five-year grind. Born and raised in L.A., the songstress made her first upload to Soundcloud in 2013 at just 16-years-old. She developed a knack for music by studying piano and dance as a kid and listening to the likes of Busta Rhymes, Erykah Badu, Nicki Minaj, Drake, and more. Soon, she went from obsessing over Catwoman (the Halle Berry version) to “crate digging” on YouTube. The budding talent taught herself Logic and how to compose on a midi controller. Adopting the moniker Doja Cat, she organically attracted a veritable cult audience by consistently churning out content without letting up. Simultaneously, she often showcased the creative process in real-time on Instagram Live and Periscope—joined by her cat Alex, of course.

Signed to RCA during 2014, she unveiled her acclaimed Purrr! EP. Its lead single “So High” impressively racked up over 30 million cumulative streams and garnered praise from tastemakers such as Fader, Vibe, Paper, Pigeons & Planes, and more. Averaging nearly half-amillion monthly listeners on Spotify, she further engaged that growing fan base by touring with the likes of Lizzo, Father and Theophilus London. Along the way, she assembled what would become Amala. Titled after the singer’s legal name, it stands out as her proper introduction.

“Inspiration came from many different places,” she explains. “Musically, the album is like an Easter basket of singles.” “I was so young. I was experimenting and getting to know myself as a person and as an artist. I’m making my own way here.” The first single “Roll With Us” flaunts an unshakable hook—“Baby you can roll, roll with us”— over lithe guitars and airy beats. Most importantly, it showcases the scope of her undeniable and unpredictable style. “I took that one from the idea of hanging out with friends, enjoying life, and traveling,” she goes on.

“Join in. That’s my party song all about inclusion, love, fun, and kicking back. There’s a relaxed energy, but it still moves.”

Elsewhere, “Go To Town” kicks off with a falsetto chant before jumping back and forth between robust crooning, airtight rapping, and flirty adlibs all punctuated by hilarious samples. “That’s all taking control sexually in a relationship,” she admits. “It matches the beat, which remined me of a scene in a movie where two people meet at a party, hop in a cab, and have this crazy no-strings-attached thing. It’s about being a dominant woman in a sexual aspect.” Whether it’s the confectionary pop of “Candy” or grinding crescendo of the finale “All Nighter,” Doja Cat leaves a lasting impression across the board on Amala. “I want you to move when you hear this,” she leaves off. “I hope you feel like getting up and dancing or going out once it comes on. At the same time, I want to evoke as much emotion as I possibly can with this. I’m giving you something different.”