“As flowers unfold, vines over-growing the underwater architecture and glowing white spirits dance around the submarine, this is the ideal visualisation of the reverb-heavy track from the Denmark-based band.” It’s Nice That

When Californian songwriter/bassist Maddy Myers and Danish guitarist Gustav Moltke decided to collaborate, the band Moon Panda was born. Today, the band have released a video for “That Girl”, directed and animated Barcelona-based Andrew Khosravani and David Borrull (the latter also known as Maliboo). In a feature with It’s Nice That, Khosravani explained that, “what we really wanted to achieve with the artwork was a sense of depth, wonder and magic.

Watch video for “That Girl”Read It’s Nice That featur

Last week, the band released their debut EP ‘Pastel Pool’, which premiered at Earmilk, who described it as “exquisite…infectious and intimate”. The band also announced they will be performing in London on February 6th at the Sebright Arms and been confirmed to play at Austin, TX’s SXSW in March 2020. 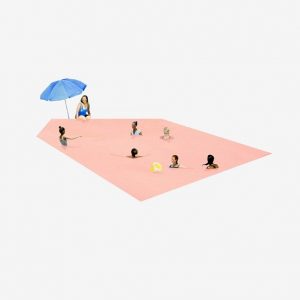 “This EP has taken us nearly two years to record and release – we’ll try to be quicker on the next one! So much has changed within that time frame. We’ve moved cities, and then countries, played with so many different musicians, and really figured out who we want to be… at least for now.

Each song is atmospheric and spacey in different ways. Listening to them feels to us like swimming through pools of different pastel colors, which is where the title comes from. We want our music to be very visual and always strive to create something that could bring someone into another world – both just by listening or by watching our videos.” – Moon Panda songwriter, Maddy Myers

Watch videos for previous singles:
‘Gun’ / ‘Rabbit’ / ‘On The Attack’