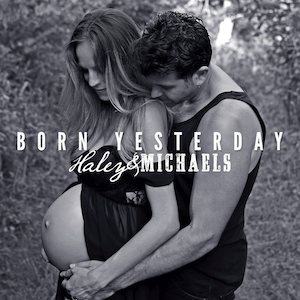 Sharing the good news exclusively with People yesterday, the couple – Shannon Haley & Ryan Michaels – said: “We are over the moon excited to welcome our little Keira Harmony to our family. We could not be more in love with her. We wrote the song ‘Born Yesterday’ for her and we hope that it will do for others exactly what she’s done for us; bring love and joy to our world.” (Read the full piece here.)

Both originally from San Francisco’s Bay Area, Shannon and Ryan met in Nashville, where they now live – along with the new addition to their family – and have built a reputation for relatable lyrics and powerful harmonies, unafraid to share personal moments with listeners through their music. Breakthrough hit ‘Giving It All (To You)’ was inspired by their wedding vows, and with over 40m streams to date, has also been chosen as the music for numerous fans’ special days, captured in a compilation video here. For the official music video, which included footage from their own wedding, they returned to film a performance at the venue, Saratoga’s Mountain Winery, where they got married in May 2015.

Since then, their music has taken them all over the USA, with four appearances on NBC’s TODAY show; performances at the famous Grand Ole Opry and tour dates with the likes of Jason Aldean, Dan + Shay, Chris Young and Old Dominion; helped them forge a creative partnership with their original hometown team the San Francisco 49ers; and found new fans through TV & film placements including Netflix’s Walk. Ride. Rodeo, which featured their debut album’s title track ‘Hail Mary’. They’ve been named one of Rolling Stone’s Artists You Need To Know and have been featured in TIME, The New York Times, Washington Post and USA Today. As their new music continues to reflect the couple’s major life events and personal moments, the end of 2020 – a challenging year in many ways – marks the beginning of another exciting new chapter for Haley & Michaels.