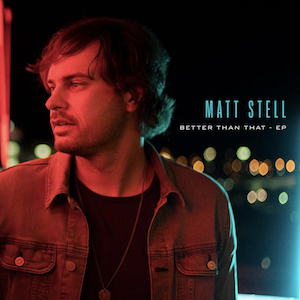 With his current US Top 10 and rising single “Everywhere But On” soaring up the radio and streaming charts, Platinum-certified singer Matt Stell is gearing up to release a new EP —Better Than That— on 16th October.

Co-produced by Matt with Ash Bowers, Better Than That features five new songs, including the EP’s title track, which is available now along with the “Better Than That” lyric video. In addition to the new tracks, the EP includes the single “Everywhere But On,” his multi-week No. 1 Platinum-certified smash, “Prayed For You,” as well as the recently released “If I Was A Bar” (pre-order/pre-save here).

“I think the silver lining to quarantine and being off of the road is that I’ve been able to focus on writing and becoming more creative,” says Stell. “I’m really proud of these new songs, so it’s exciting to finally get them out to the fans.”

According to critics, that creativity has certainly been evident through his recent releases, which appear on Better Than That:

Stell is firing on all cylinders— the Arkansas native has already amassed over 340 Million cumulative streams across his catalogue worldwide. He was also recently featured on “Over Yonder,” a collaboration with viral sensation and Christian rapper Lathan Warlick, which, in a time of uncertainty and civil unrest, offers positivity and hope towards coming together.

MATT STELL:  With over 340 Million cumulative streams across his catalog to date and a Top 10 and climbing single “Everywhere But On,” Platinum artist Matt Stell is having a banner 2020.  Stell kicked off the year with a performance on “Good Morning America,” leading into his first headlining tour. He started Penned Up – his hugely successful 8-week Instagram-live series, was the first-ever artist to receive a virtual plaque from the RIAA for his Platinum break-through debut single, “Prayed For You,” and performed the National anthem for a NASCAR Cup Series Race. Matt was also featured on “Over Yonder,” a collaboration with viral sensation and Christian rapper Lathan Warlick, which powerfully blends hip hop patriotism with a call for unity.

Now, he’s gearing up to release his Better Than That EP on October 16th.  Co-produced by Stell with Ash Bowers, the EP features 8 tracks, 5 of which he wrote, including his multi-week No.1 “Prayed For You,” and the current single “Everywhere But On.” The EP also includes the recently released “If I Was A Bar,” and its innovative music video filmed during quarantine, where Matt played all 13 characters.

In 2019, Matt’s US multi-week No. 1 Platinum-certified hit, “Prayed For You” made him the ONLY debut artist single to top the Billboard Country Airplay chart that year (for two consecutive weeks), also notching the top spot in Country Aircheck/Mediabase. The highly acclaimed smash, written by Stell with Ash Bowers and Allison Veltz Cruz, has accumulated more than 270 million streams worldwide.