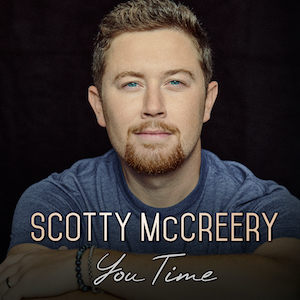 The new track gives fans their first look at what to expect from his forthcoming album, the follow-up to his three consecutive No. 1 hits from his RIAA Gold-Certified Seasons Change. A release date for the new project will be announced soon. Listen to “You Time” HERE and watch the accompanying behind-the-scenes video.

”I am so excited to have new music out,” said McCreery. “I wrote this with Frank [Rogers] and Aaron [Eshuis] at a time when I was on the road more than I’d ever been before, and I’d get home just in time to see Gabi heading out to start her shift as a nurse. I was craving some ‘You Time’ with her and that inspired this song. Of course, now during the pandemic, we’re having a lot of ‘You Time’ which I love.”

Written by McCreery, Frank Rogers and Aaron Eshuis, and produced by Rogers, Eshuis and Derek Wells, MusicRow proclaimed of McCreery, “as always, he’s a country beacon,” and of “You Time,” “upbeat and romantic, this has a lot going for it,” while ABC News Radio called it “a playful ode” that Taste of Country observes has “a progressive beat with more bounce.”

As the first act to welcome the return of live concertgoers to the Ryman Auditorium, the multi-Platinum artist gave the debut performance of “You Time” on Sept. 4th to both a national livestream pay-per-view audience as well as a sold-out limited in-venue audience of 125 fans in the ‘LIVE AT THE RYMAN’ series. This was a full-circle moment as McCreery’s sold-out performance in March of this year marked the last show by a single artist act to take place prior to the Ryman’s temporary suspension of operations.

Prior to his performance at the Ryman, McCreery was surprised with a plaque commemorating “In Between” hitting RIAA Gold-Certified status on HLN’s “Morning Express.” “In Between” marked McCreery’s third consecutive No. 1 from Seasons Change and this weekend (Sept. 19th-20th) the song’s accompanying video hit No. 1 on CMT’s “Hot 20 Countdown.” The blockbuster track follows smash hits RIAA Double Platinum-Certified “Five More Minutes” and RIAA Platinum-Certified “This is It.”

The North Carolina native is currently hard at work on his follow up to Seasons Change, which Rolling Stone named as one of the “40 Best Country and Americana Albums of 2018” and Whiskey Riff named it as one of the “30 Top Albums of 2018.” Taste of Country said Seasons Change “showcased [McCreery’s] growth as a songwriter and storyteller and his understanding of how and when to share parts of his own story.”

Since mid-March, McCreery has already given nearly 100 live-stream performances ranging from Twitch Stream Aid, “Circle Sessions,” “Feed the Front Line Live, Presented by CMT” and numerous Facebook and Instagram Live events with country radio stations across the nation and media outlets, which he has dubbed his “Somewhere in Quarantine Tour.”

After sold-out European dates last October, Scotty McCreery is due to play the UK & Ireland with his full band in May 2021:

McCreery achieved new heights by earning three back-to-back No. 1 hits from his most recent album Seasons Change, the RIAA Gold-certified project which debuted at No. 1 on the Billboard Country Album chart: the RIAA Double Platinum-certified “Five More Minutes,” the RIAA Platinum-certified “This Is It,” which stayed at the top of the charts for two weeks, and RIAA Gold-certified “In Between.” His single “You Time” from the forthcoming follow-up to Seasons Change is available everywhere now. He co-wrote all 11 songs on Seasons Change. All four of his albums have debuted at No. 1 on a Billboard Albumschart, with current combined sales surpassing 3 million copies. He’s earned one Double Platinum, four Platinum and one Gold singles; won the 10th season of “American Idol” in 2011; was named the ACM New Artist of the Year in 2011; won the CMT Music Award for Breakthrough Video of the Year (“The Trouble with Girls”) in 2012; American Country Awards for New Artist of the Year in 2011 and Breakthrough Artist of the Year in 2013; BMI Awards for writing One of the Top 50 Country Songs of the Year three times (in 2015 for “See You Tonight,” in 2018 for “Five More Minutes,” and in 2019 for “This is It”); a Carolina Beach Music Award for National Dance Song of the Year (“Barefootin’”) in 2018; and the NSAI Nashville Songwriter Award for One of the Top Ten Songs I Wish I’d Written (“Five More Minutes”) in 2018. The North Carolina native released his first book, Go Big or Go Home: The Journey Toward the Dream, in 2016; it was recently re-released in paperback in 2020. McCreery launched his recording career by making history in 2011 as both the first country artist and the youngest male artist of any genre to debut his first studio album, the Platinum-certified Clear as Day, at No. 1 on the all-genre Billboard Top 200 Albums chart.