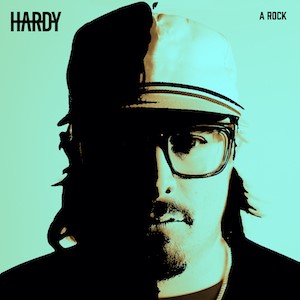 Penned by HARDY with Zach Abend and Andy Albert, produced by Joey Moi and co-produced by Derek Wells, ‘Boyfriend’ twists a breakup kiss-off into HARDY’s version of a Country love song; a one knee on the floor, lifelong proposition that cuts straight to the chase, showing off the signature turns of phrases and tongue-in-cheek lyrical personality that have become synonymous with his proficient storytelling.

“This song is definitely not what you think when you hear ‘I don’t want to be your boyfriend anymore,’” shares HARDY. “The idea of this song comes from a personal experience, inspired by the one and only Caleigh Ryan, my girlfriend. This is the first ‘I love you’ song, that does not have a redneck twist that I’m releasing – the first real vulnerable love song that I’ve put out, and I’m excited for people to see that side of what I do.” Listen here.

Treating fans in tandem with the all new music, HARDY released the next installment of his HARDY 360 LIVE series today, performing the countrified swooner backed by his full band. The dynamic clip proves that HARDY’s versatility as a songwriter translates just as fluidly to his artistry, delivering the impassioned melody with a hard-rock edge, blending influences like Pearl Jam and John Prine with award-winning lyricism and unapologetic style seamlessly.

Pushing the pedal to the metal on A ROCK, HARDY’s credibility only continues to grow. Current single ‘One Beer‘ feat. Lauren Alaina & Devin Dawson is on the verge of Top 15 at Country radio, while the 2X ACM nominee – Songwriter of the Year and Song of the Year (‘God’s Country’) – was just named the 2020 AIMP Songwriter of the Year, and earned his FIFTH #1 as a songwriter with LOCASH’s ‘One Big Country Song’.

With every new release, Big Loud Records’ HARDY continues to “embody that classic Country spirit while pushing the boundaries of modern radio music” (American Songwriter). His Top 20 single ‘ONE BEER’ feat. Lauren Alaina & Devin Dawson is accelerating at Country radio now, previewing his debut album, A ROCK (4/9), alongside fan favourite ‘BOOTS’, and newest release ‘GIVE HEAVEN SOME HELL’. The collection follows 2019’s countrified mixtape HiXTAPE VOL. 1 — praised by Billboard as “one of the most ambitious projects of the year” — and career-launching EPs THIS OLE BOY and WHERE TO FIND ME. As the newly-minted 2020 AIMP Songwriter of the Year, a MusicRow 2020 Next Big Thing artist, CMA Triple Play award recipient and Vevo DSCVR artist, the pride of Philadelphia, MS has earned his reputation as “Nashville’s Most Clever New Redneck Songwriter” (Rolling Stone) with five #1 singles as a writer since 2018: Morgan Wallen’s 2X Platinum “Up Down,” Florida Georgia Line’s 2X Platinum “Simple,” Chris Lane’s Platinum “I Don’t Know About You,” Blake Shelton’s 3X Platinum “God’s Country,” and LOCASH’s “One Big Country Song.” The ACM nominee for Songwriter of the Year and Song of the Year (“God’s Country”) has shared the stage with FGL, Chris Lane, Thomas Rhett, Cole Swindell and Morgan Wallen.