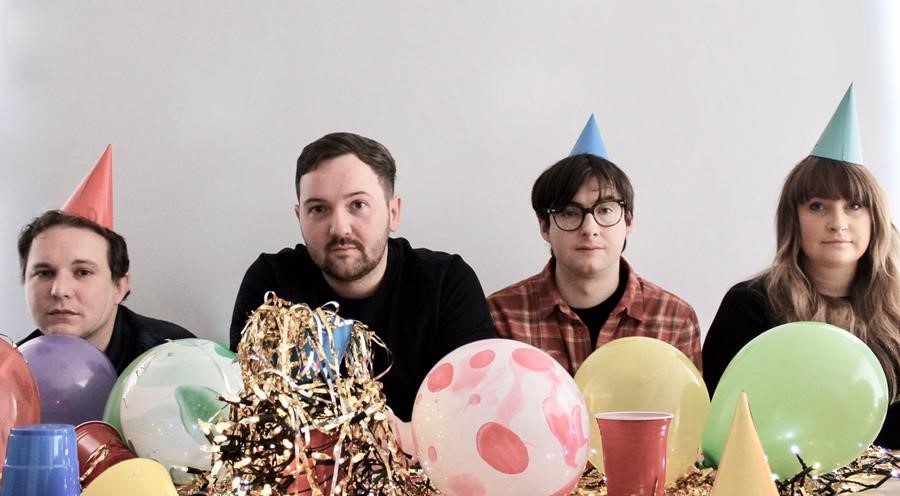 Glasgow quartet Yakima have been steadily developing their sound through the release of a handful of ltd single releases and are now finally ready to bring their debut EP “Go Virtually” into the world. In their relatively short gestation period, they’ve shared bills with the likes of Swimming Tapes, Pottery, and played the first ever YALA! Records night to be held in Glasgow. Today, they share lead single “It Helped” which is premiering at CLASH here. They say; “Latest track ‘It Helped’, with its lo-fi instrumentation and hazy vibrations, uses warm yet wistful melodies to explore the angst of fighting addiction.”

Listen to “It Helped” HERE

“It Helped” features the production and vocals of Benji Compston and Jon EE Allan of Happyness. Bassist and vocalist Neil McArthur comments on the track; “It Helped was initially about trying to curb smoking cigarettes but with a lapse of time, it appears it could be about anything really. Could quite easily be about toe sucking. Maybe it is. It definitely is.”

Writing and recording their debut EP – with production coming from Benji Compston and Jon EE Allan of acclaimed band, Happyness – it was in the unusual setting of a drafty gatehouse next to a nearby castle (with a ceiling made entirely of spider webs) that the band put the tracks down. It was a setting that was sure to set imaginations running wild – and so it proved. For Yakima, their music is a vessel though which the worlds of reality, perception, imagination and observation all come to be blurred. Woozy lo-fi lullabies and melodic hazes turn from sepia to multi-colour and back again in an instant, as they toy with the often-complex relationship between what’s right in front of you and what’s in your mind. It binds ear-worm melodies to often bleak character analyses.

More about the EP “Go Virtually”

Opening track “It Helped” looks reality in the eye, focusing on the battle involved in quitting smoking, while “Judy’s Lament” has its roots in reading about Judy Garland’s insomnia – eventually turning into a song about her imagined feelings on that lack of sleep. “Thanks” takes its cues from Twilight Terror era Pavement, and “I’m Happy (In No Way)” realigns the melodic cut and thrust of Teenage Fanclub or The Posies. “Real Time” loses itself in a chaotic improvised outro, while closing track “Sheep Boy, Cry Man” offers the EP’s most sombre moment. The title comes from learning about ‘Cry Rooms’ which are rooms in Japan that people use to cry in, in order to relieve stress. Here, they chase characters searching for a way to express themselves, examining their self-worth.

It can be heard, at the core of the band’s sound, there is a keen familiarity with the vocal harmonies of others such as The Byrds, Elliott Smith, The Beach Boys and Teenage Fanclub. Similarly, there is an exuberant aspect to some elements of the music which can be traced to an enjoyment of groups such as Camper Van Beethoven, The Chills, The Field Mice and The Db’s. Underneath this initial presentation of influences, Yakima also incorporate a more fragile and tentative array of sounds which are drawn from the likes of Galaxie 500, Bedhead, Sparklehorse, Low and Duster.