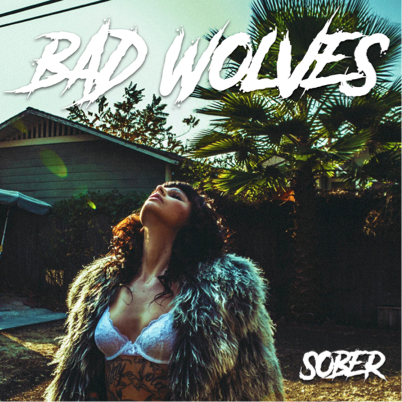 The release of “Sober,” defined the direction of not just the band as a whole, but of vocalist Tommy Vexthimself. The song’s powerful, somber melodic undertones set the stage for Vext’s story of ruinous romantic and family relationships, steeped in addiction and self-desecration, that finds recovery possible for those who can stay the course. “This song was a unique opportunity to talk about addiction not only from the perspective of the addict but also from the perspective of their loved ones,” says Vext. “The message is very different from traditional songs that seem to always perpetuate a mentality of self victimization which is exactly the kind of misguided thinking that perpetuates the mental obsessive side of alcoholism & addiction.

In the end the moral of the story is about holding on to not giving up on ourselves or the people who are trying – who are really, really trying to make and better themselves.”

Bad Wolves came to Vext as an opportunity to try his craft again after his stint in Divine Heresy was brought down by his own demons and addictions, a childhood family life to the extent that most nightmares never reach, and an adult existence that took him even deeper into that hell.

Yet, it was a call from another addict, a kid looking for help, that brought Vext off the suicidal edge, literally, and into a life of service in recovery. Vext declared in an August 2018 interview for Psychology Today,titled Tommy Vext and the Deafening Sound of Self-Termination: “Because when we are in that state of self-termination it’s so deafening–the only way to break out of it is to have contact with people who literally have it worse and are still hopeful. And that’s the most powerful thing about altruism. It’s the foundation of my recovery and it’s the fabric of everything I do. I think we’re all here for a reason, and we’re all here for a purpose. Some of us have to find our purpose, and sometimes it’s thrust upon us. . . Such is life.”

“Sober”will be the next track off of Bad Wolves’ sophomore album N.A.T.I.O.N,that goes to radio. Their current single, “Killing Me Slowly”is presently at #2 at rock radioand well on its way to becoming the band’s fourth consecutive chart topping single – with tracks “Zombie,”“Hear Me Now”feat Diamante and “Remember When” from their previous album, Disobey, also reaching #1.

In 2019, they continued that momentum with their sophomore album, N.A.T.I.O.N.The stunning 12-track follow-up to their debut album, Disobey, is a bit of a departure – staying in the same realm musically, but breaking beyond. N.A.T.I.O.N. came in at #1 upon its release on the Top Hard Rock, Current Hard Rock and Billboard Hard Rock charts.

Their global breakout single, “Zombie,” is platinum in the U.S. and Sweden, double platinum in Canada, gold in Australia and IMPALA Diamond in Europe. The track has topped charts worldwide, including the U.S. iTunes overall and rock charts, Billboard’s Mainstream Rock Songs chart, Spotify’s Global Viral 50 chart, while also reigning atop the Active Rock radio chart for three straight weeks. The official music video for “Zombie,” a tribute to the late singer Dolores O’Riordan of The Cranberries and an homage to the original, has garnered over 255 million viewsacross platforms. On June 19th,  2018, Bad Wolves presented a $250,000 check to Dolores O’Riordan’s four children, with a continued promise to donate all of their royalties from the song to them.

ABOUT BETTER NOISE MUSIC:
BETTER NOISE MUSIC, a division of BETTER NOISE ENTERTAINMENT, is a content company that creates music, books, films, documentaries, theatrical productions, tours and television that provide opportunities to reach audiences in unique and impactful ways.  More than a record label, the company develops and nurtures artists and brands.  Founded by music industry veteran and independent pioneer in 2006, Allen Kovac, what was then called Eleven Seven Music, grew into the music industry’s global rock powerhouse in the ensuing 13 years. The label did so by emphasizing artist development and diversification while maintaining its indie roots.Partnering with FUGA, AMPED and Membran, the company operates a global marketing and distribution platform with offices in New York, Los Angeles, London, Berlin, Toronto and Sydney.  https://betternoise.com/