Something To Enjoy – The Dust Coda 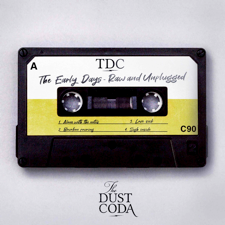 The Dust Coda is thrilled to announce the release of their brand new EP Early Days – Raw and Unplugged on 5th June 2020.

In this almost surreal pandemic world, the band decided to brush the dust off some old recordings and release a collection of four acoustic tracks, which will give fans an intimate listening experience.

This EP further unveils The Dust Coda kaleidoscopic songwriting abilities; each song has its own character, whilst remaining cohesive to an almost Southern rock warm sound. Throughout the EP mellow guitar riffs combined with the gritty vocals are the key elements setting the scene for an intense acoustic journey.

The band comments: “These recordings were made one very early morning during the writing sessions for our debut album. We had written the songs and started demoing them in between drinking sessions and strangely kind of forgot about them. The hilarious part is John can barely remember doing the vocals for them! It was only during the current lockdown, whilst we were messaging around ideas, that they kept finally coming up in conversation. We agreed that there was something special about them, the rawness and the time in which they were made resonated with the current situation in which other artists are having to create at home, as we once did, during these strange times. So we thought what the hell – why not just put them out there and give our fans something to enjoy.”

Formed in 2015 around the nucleus of guitarist Adam Mackie and singer John Drake, The Dust Coda honed their sound during 2016 in the studio with award winning producer Clint Murphy (Thunder, Manic Street Preachers, Devilskin). The band released their self-titled debut album in October 2017 to critical acclaim, were proclaimed “Ones To Watch” by Planet Rock and subsequently nominated for Best New Act 2017.