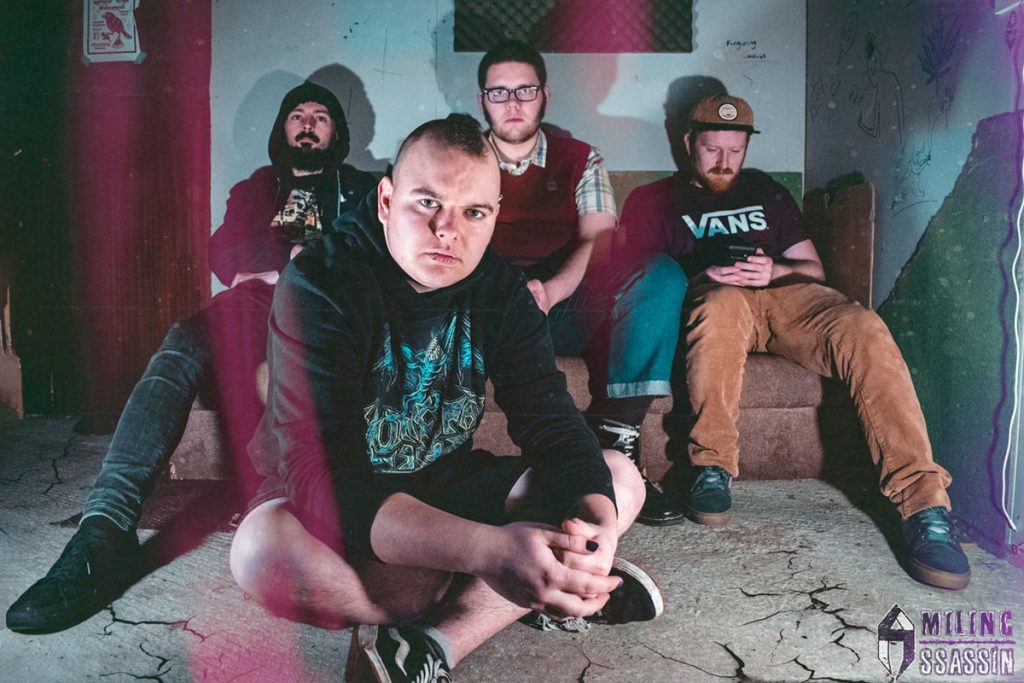 Yorkshire hardcore punk four piece, Smiling Assassin have just unleashed their debut single ‘Coping, reeking of self-awareness they are following the precedent set by the early punk movement with a frenetic reality you can connect with. Coping is the first track from their album ‘Plight Of The Millennial’ which is set for release later this year.

Coping is the first official release from the band, having formed in early 2019. Having quickly gained a following across Yorkshire’s live circuit, the band hit the studio to to lay down their debut full length release. You can pre-order Plight Of The Millennial digitally at the Smiling Assassin Bandcamp and a physical copy at their official store.

Vocalist, George Garnett explains the inspiration behind Coping:
“Coping is about some friends, I have a friend who drinks heavily when their mental health takes a dive. Another friend shuts them self away. The more I noticed them doing that, the more i saw other people doing the same. I tried to write it from their perspective in a confession sort of way so other people may feel solidarity in their own situation.”

Robbie Johnson (Drummer) continues:
“The song for me is about not what the worlds idea of mental health is but what mental health actually looks like. Different people cope in different ways, our coping mechanism is our music, it’s a way to feel, forget, connect, accomplish. That’s what this song is about, Coping.”

Coping is available from all great streaming and retail outlets right now, check it out at: Spotify, Apple Music, Amazon & Bandcamp

“This is a self-depreciative and brutally honest examination of the destructive coping mechanisms of today’s youth, which are extending into adulthood at unprecedented rates. With the dramatic rise in individuals turning to drugs, alcohol, and mental isolation, there’s a direct and poignant correlation with the very real struggle of the mental health services, trying to “cope” with this surge in cases.“.

George reflects that they wanted the video to reflect the track, commenting “For the music video we wanted to capture a warts-and-all kind of insight into someone’s mental health. The monotonous bilge of living with poor mental health.“.

Though the message is serious, Smiling Assassin are still having fun! Robbie says, “The Music Video was wicked fun, we announced the show for the live shots about a month before and the turn out and support was sick! Our first ever gig was at The New Adelphi club so it felt right going back to where it all started, we’re pretty pleased with how it came out.“.

In light of the most high profile issue facing the world today, Smiling Assassin have put out an important safety message, in their own unique way of course! Spontaneity is the order of the day, reacting to situations as they happen, this has never been more true than with this track, which was written, recorded and the video filmed all within a 24 hour period. As the band explain, “It’s not perfect, but neither is the world!“.

Smiling Assassin are a hardcore punk four-piece, formed in early 2019.

The band’s intention is to modernise the punk scene, and to shed light upon some of the issues that young people are facing in 2020.