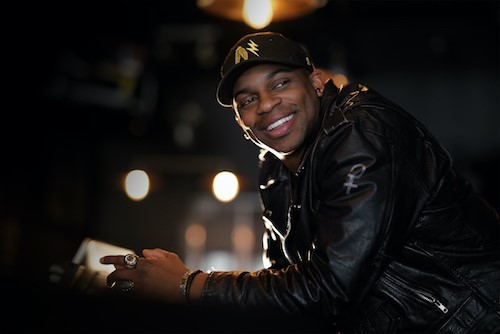 Platinum-selling singer/songwriter Jimmie Allen lands his second career #1 single with “Make Me Want To” hitting #1 on both the Billboard and Mediabase country US radio charts.

This accomplishment marks the first time in history that a black artist launched their career with two consecutive #1 singles on Country radio—his first being the platinum selling No. 1 single, “Best Shot,” off his Stoney Creek Records/BBR Music Group debut album  Mercury Lane.

On Sunday, the same day Jimmie learned his single was going to claim the top spot on the chart, he and his fiancé welcomed their daughter Naomi to the world, making the career milestone that much sweeter.

Of the achievement Allen states, “Super thankful for my radio team, management, band, label and booking agency on their hard work and never giving up on the song. My co-writers, Paul Sikes and Jennifer Denmark are special talents with great hearts, I love them dearly. To everyone at Country radio THANK YOU for supporting this song. The cool thing is I thought the best part of day would be getting a No. 1, but a few hours later my daughter, Naomi was born. The baby and momma are doing great. March 1st will forever be my favorite day. Never give up on your dreams or yourself. Love always wins.”

The news follows the release of his new single “This Is Us” featuring Noah Cyrus – listen HERE – with a music video on the way.

ABOUT JIMMIE ALLEN:
Signed to BBR Music Group’s Stoney Creek Records, Jimmie Allen’s debut single “Best Shot” is a certified hit, claiming the No. 1 spot for three weeks, making history as the first time a black artist has launched a career with a No. 1 hit with their debut single on country radio.

On the heels of that success, Allen’s second single, “Make Me Want To,” off his debut album Mercury Lane, also hit No. 1 on the Country radio charts. Mercury Lane, named in tribute to the street he grew up on and the origin of his incredible journey, features a cutting-edge mix of country, rock, R&B and pop that draws upon the influence of his family and small-town upbringing of the critically-acclaimed rising star. Rolling Stone raved Allen’s debut “challenges the narrowly defined model of what constitutes a next big thing in country music in 2018” and The New York Times dubbed it one of 2018’s strongest, calling it “a conventional country album, filled with songs about the small details.”

Having been praised as a standout artist at London’s Country Music Week (2018) and C2C Festival (2019), Jimmie Allen returns to Europe this weekend to play C2C Berlin & Amsterdam, with additional dates in Frankfurt and Hamburg.