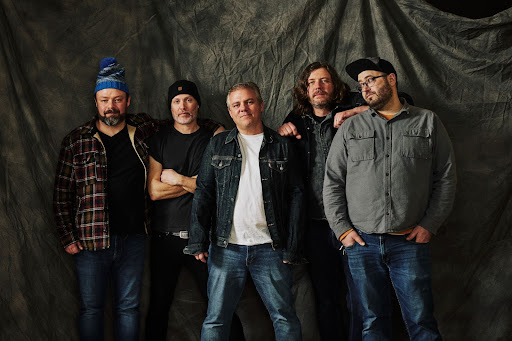 On their second single of 2022, Bird Language would like to take you on a “First Date.”

The Boston-based ambient pop-rock quintet release their latest track on Friday, March 25, the follow-up to February’s “Apoplectic” and the latest from the band’s forthcoming debut album 625 Days, which arrives this spring.

True to the LPs flair for eclectic sounds and styles, “First Date” shows a slightly different musical shade of Bird Language. Where “Apoplectic” was driving and urgent in its nature, “First Date” shines under a golden glow of ‘70s soft rock; it’s almost Yacht Rock-ian in its easy grandeur and effortless heaviness, with a beloved Boston-area dining spot serving as the lyrical backdrop for the track’s atmospheric, ballad-like demeanor.

It's the story of a first date at my favorite Somerville bar, Highland Kitchen,” says Bird Language vocalist, keyboardist, and lyricist Jeff Nicolai. “Well, I suppose it is about my observation of a first date playing out at the bar. Highland Kitchen is a popular spot for first dates. I was there one night and it seemed like every couple at the bar was on a first date. One looked like they were having trouble staying focused on each other, but trying really hard. The other seemed to have one person who was clearly talking way too much.”

Though “First Date” is thematically structured around would-be lovers meeting for the first time, the music that surrounds it showcases a band that has quickly found its rhythmic chemistry. Upon forming a few years ago, Bird Language set out to create a soundscape and environment where melody and rhythm could flourish over and above song structure and lyrics, an experimentation in creating emotion through a certain musical language.

In the mid-’10s, Bird Language’s initial batch of demos were rooted in this type of experimentalism, jam sessions that expounded upon loose ideas, hooks, or riffs, and an ethos that eventually crystallized into where the band is today. That experimentalism has since made room for an enhanced storytelling, and the two pieces complement each other throughout 625 Days, an album that takes its title from the amount of time it took, start to finish, to create it.

Guitarist Andrew Doherty says the band’s initial goal was “to write music that created a sense of proximity within the expanse of space, while connecting with the heart.” Uniquely, “First Date” leans into this approach, leaving room to breathe between its various layers as it tugs and pulls with a casual aural undertow. Weeks after its release, “Apoplectic” has become a familiar song on New England indie radio, immediately becoming a mainstay on UncertainFM and cracking the Songs of the Week multiple times on Boston Emissions with Anngelle Wood. Now, Bird Language are eager to witness the reception to “First Date.”

“I’ve always been most proud of this song as it shows some risk-taking and variety in our sound,” says guitarist and co-songwriter Neil Simmons. “It’s not always easy to leave empty space sonically with a five-piece band; everyone wants to be heard, but I think we do a decent job holding back our play for the betterment of the song.”

Simmons says “First Date” was musically shaped by ‘70s soft rock and feelings, furthered by a chorus Doherty brought to the table and Nicolai extending out of his vocal comfort zone. Never losing its deliberate pacing, the track is propelled by Bird Language’s rhythm section of drummer Michael Nashawaty and bassist Pat Piasecki, providing low-end balance to the shimmering forces that elevate it. This creative equation all adds up to a musical vibe that showcases Bird Language’s individual talents amongst its members, but also the band’s unmistakable songwriting cohesion.

“For me what makes a song good is the emotions you feel hearing different chords and notes,” says Simmons. “Those choices can transport the listener to a new place. I want the listener to feel what I felt writing it.”