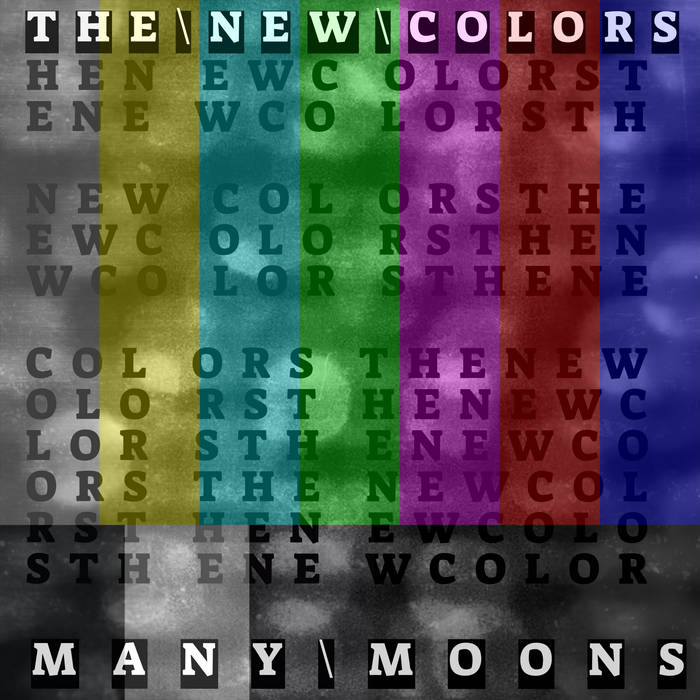 There’s an old adage in music circles about how an artist has their whole life to write a first album, and then a year or two to write the second. For The New Colors, the solo project from Worcester native David Falcone, there’s no need to worry about that second part just yet — he’s too busy getting out the album he’s spent his whole life creating.

That album, Many Moons, is out this Friday, November 5, fueled by its lead single, “Idiocy,” and spotlight track “In My Dreams.” For Falcone, the LP and its varied styles and sounds, glowing across a spectrum of psych-pop and alt-country, is a culmination of a life spent writing and creating music, collaborating with others (he is currently the drummer in Adi Sun’s band), and slowly finding his creative voice. And as the album swirls in themes of dealing with adversity, failed relationships, and life’s seemingly endless string of setbacks, what ended up bringing these songs to light after years of being stored away as rough demos on his iTunes was the fallout from one of Falcone’s darkest days: the death of his mother.

He received the call early one morning in May 2019, and the musician-by-night, airline-pilot-by-day remembers it like yesterday.

“I’m on the road in Denver for work and my phone starts blowing up at 3:30 a.m. Uh-oh,” Falcone says. “It was my wife, and she told me that my mom had died in her sleep. I’ve experienced loss before -- grandparents, high school friends, a bandmate -- but no loss has ever sliced that deep. In the aftermath, I came to the realization that our time on Earth is precious and so very limited. One of the things on my back burner was making actual recordings of my songs, but I never started that process because of jobs and relationships and blah, blah, blah. After my mom died I knew I needed to get my ass in gear and tackle this project.”

Falcone got to work. He bought recording gear and microphones, and the longtime drummer and guitarist added production skills to his repertoire. He’d spend hours on YouTube learning about music production and engineering, becoming familiar with audio interfaces and all the backend work that would go into a DIY approach to making an album. Taking his arsenal of demos and pieces of songs from voice memos that date back decades and combining them with new material he had written — songs about dreams, fatherhood, failed relationships from his past — the debut album from The New Colors was finally coming into view.

“After a few months of tracking I realized that, if I was going to do this, I needed to do this right,” Falcone says. “I made the decision to craft a real deal album. One with a strong theme. One that ebbs and flows like the albums I love to listen to. It was a struggle to balance recording and producing an album with being a full time husband, dad, and airline pilot, but every spare second I had to devote to music, I would work on the album.”

Titled Many Moons because, in a sense, it has taken so long for these songs to be presented in the context of a full album, Falcone recorded the LP in a soundproof eight-by-seven build-out space in the basement of his father’s triple-decker in Worcester (the final mix would take place in an empty apartment in that same building), and produced it at his home in Auburn and countless hotel rooms across the country while traveling for work. In a rare outreach, Many Moons was mastered by Chris Bethea at Muscle Shoals Mastering in Florence, Alabama (“I used to fly small turboprop airplanes into Muscle Shoals,” notes Falcone, “and would explore the area on layovers.”)

“I started this project with the intention of creating a full album, but I didn’t know if it was going to clock in at 30 minutes or three hours,” says Falcone. “I just knew I wanted two sides and a comprehensive arc. As the project progressed, I realized that the combination of old tunes I wanted to re-record and new ideas that fit the theme would put the record over 45 minutes and less than an hour. That seemed like a perfect length, so I stopped trying to fine-tune the track listing and focused on tracking and producing all the songs that made the final cut.”

That includes the album’s lead single “Idiocy” and spotlight track “In My Dreams,” two pieces of music that link The New Colors’ psych-pop and indie rock leanings with jangly alt-country and Americana authenticity. Other tracks, like the stomping “No Means Yeah” and sprawling album closer “Hurry,” delve into more alternative rock territory. All 13 tracks ache and turn with Falcone’s weathered sentiments about his past shortcomings and how they shape him into the person, the husband, and the father he is today.

“Ninety-nine percent of what you hear on the record is me,” he says. “Though, I have some very special guest appearances, mostly on the instruments that I have no ability to play. My dad, Lou Falcone, is one of the best saxophone players I’ve ever heard, so of course I asked him to write and record a sax solo (‘Idiocy’).”

Elsewhere, Adi Sun plays a lead guitar solo at the end of “A Simple Gift,” and the late, great Nashville based pedal steel player Michael Douchette performed on a couple of tracks (“Idiocy” and “Don’t Count on Me”) before his unexpected passing in December 2020.

While “Idiocy” is fairly straightforward in its theme — “it’s about being AN IDIOT! Plain and simple. I wrote that song while being on the backside of an on-again/off-again relationship in my 20s,” says Falcone — other tracks, like “In My Dreams,” are more open to listener interpretation. It’s fitting for the dream-like, ethereal quality that permeated the entire album.

“At face value, the song is about the freedom and wonder of experiencing a lucid dream,” he adds. “You can do whatever the fuck you want -- the only boundary is that you must stay within the dream! When you wake-up, everything goes back to normal. There is nothing else like that on Earth. Alternatively, the song is much deeper than that. It is about the aspiration to be something bigger than yourself -- to be a rockstar, a Hollywood movie star, whatever it is on earth you hope to be when you close your eyes and DREAM. When I listen to it, I like to get lost in the lyrics and imagine it’s a little bit of both.”

Falcone concludes: “Dreams are another important element on the record -- it’s the only place I can go where there are no rules, there’s no one to appease, and in the morning everything goes back to normal. ‘Secret Place’ and ‘In My Dreams’ both talk about the clarity obtained from and the importance of dreaming in my life. ‘A Simple Gift’ implores people to cherish the small things in life -- a glass of wine while listening to great music -- and to reduce time spent on screens; it was directly influenced by my mom’s death. ‘Don’t Count on Me’ is about the struggles of being an airline pilot by day and a husband and father by night. There are many times I must break promises and miss important dates due to schedule changes at work. That song tries to explain that even though I’ll always try my best, don’t count on me to be there. It’s very bittersweet.”

It may have taken Falcone a lifetime to arrive at this moment. But now that he’s here, he’s finally looking ahead.

All songs written and performed by David Falcone

Many Moons was mastered by Chris Bethea at Muscle Shoals Mastering in Florence, AL

Falcone and Adi Sun collaborated on the album art