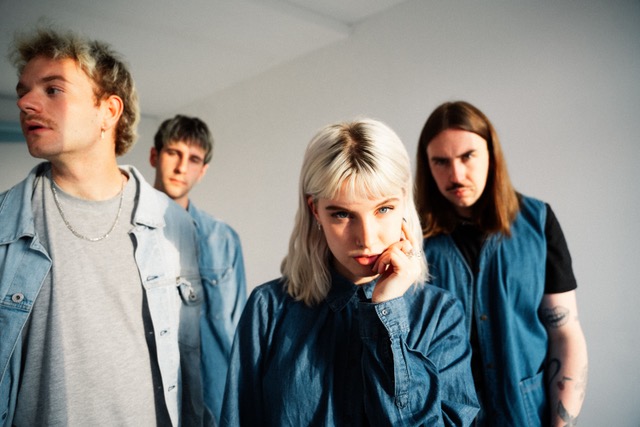 Like all great bands, swim school – completed in 2021 by the addition of drummer Billy McMahon, are musical magpies. Absorbing influences from across genres, time and a wide swath of artists and turning them into something entirely their own. On ‘making sense of it all’, those influences represent themselves in a youthful blend of fuzzy, anthemic grunge and the catchy, hook-fuelled haze of dream-pop.

Across five tracks, including new single ‘anyway’ and the acclaimed ‘outside’ & ‘let me inside your head’ the band’s lyricism matures as rapidly as their sound. Frontwoman Alice Johnson reflects upon the difficulties she has faced over the past year, candidly exploring the difficulties and sacrifices which come with a period of poor mental health.

Speaking on ‘making sense of it all’, Alice elaborates: “Each track on the EP is based on an event that I’ve experienced in the last year and the effect it had on my own mental state and also the mental state of everyone who was involved.

The title “making sense of it all” is the perfect way to express the common feeling that runs throughout the EP . There’s sad, happy and angry songs, each expressing how it feels to try and understand how you are feeling in hard situations.”

Likened to names including Wolf Alice, Foals and Dream Wife, whom they sit as comfortably amongst as they do Smashing Pumpkins and Ride; it’s proving to be a monumental year for swim school.Set to play their first ever English festival slot at Latitude Festival this July, 2021 has seen the band perform live sets for The Great Escape and BBC Introducing, tipped by key tastemaker titles including CLASH, The Line of Best Fit, DORK, Under The Radar, LOCK Magazine and Euphoria Magazine and placed on major Spotify playlists including New Music Friday UK, Hot New Bands, Fresh Finds, Fresh Finds: Rock, today’s Indie Rock to name but a few.

The release of ‘making sense of it all’ on 20th August precedes a run of forthcoming live dates, including headline shows at Glasgow’s King Tuts and Nottingham’s Bodega, and appearances at All Points East and Twisterella Festival – each assisting in defining swim school as one of indie’s most exciting breakthrough bands of recent years.Live Dates: