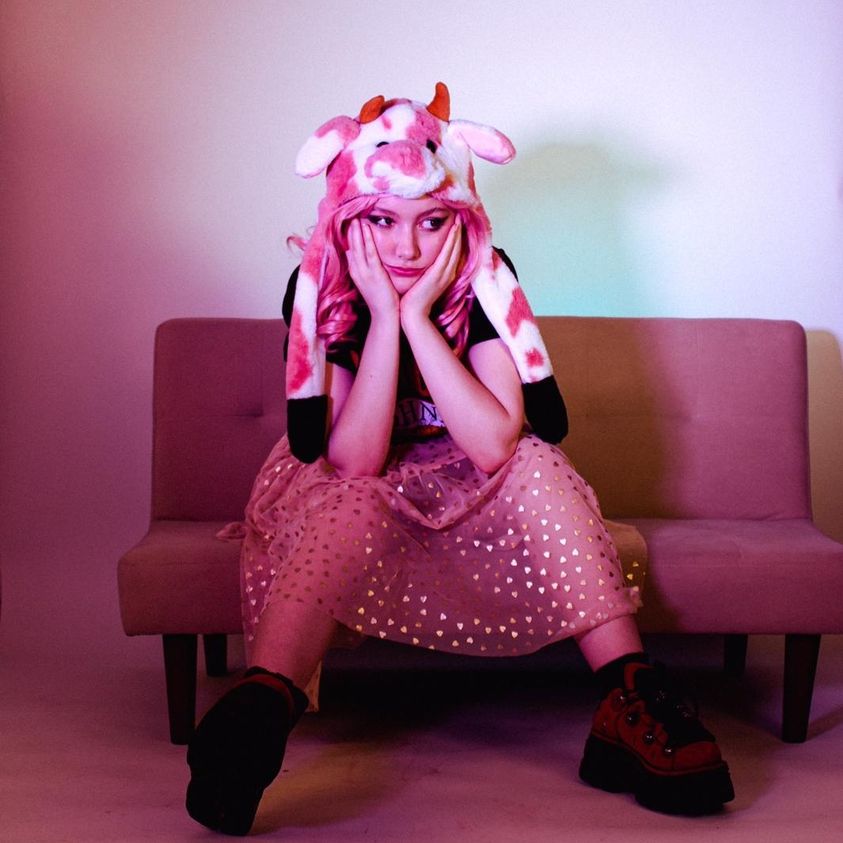 We were introduced to The World of Pinkfiz just a few short weeks ago – the four-track EP by Peterborough teenage singer songwriter guitarist Izzy (Pinkfiz), really piqued our interest.

Standing on the shoulders of seventies punk, eighties goth and nineties riot grrrl, yet epitomising the moment, Pinkfiz stamps her own style on tales of angst, sexuality and feminism.

Holding nothing back, her lyrics are personal, political, vulnerable and direct, with the openness of the blogger generation. Her softly spoken singing voice floats over her dark yet danceable guitar melodies in finely crafted indie pop songs. With traces of Sonic Youth and Hole, this is a confident and accomplished recording by one so young and unpretentious that she still has her school band performances on her YouTube page and is used to gigging to her friends. With her loyal following rapidly building up online, it can only be a matter of time before a wider audience gets to hear Pinkfiz live. We just had a quick word……

1st 3 – What was the inspiration behind each of the songs on the new EP?

Pinkfiz – All of them are based on me being angry at a lot of things because of the world we live in, there are a lot of terrible things happening. Seeing and them and not being able to do anything about them makes me so mad. So pretty much all the songs were just me being angry and I was writing all these things down.

The first song, Pleaser is about my mental health a little bit but more about how sometimes I feel that I have to put on facades around other people and I have to be someone different to each individual person and it’s just hard to actually be myself sometimes.

The Sequel was about a friendship I had that basically just crumbled and I was really upset about it. I really valued this person but it turned out that they didn’t care about me as much as I cared about them so that made me pretty upset.

The next track is Not the Only One which is about all the horrible things people have said to me about me being bi and how I was not going to change just because they are ignorant and can’t accept it.

Did I Ask? Is about sexual harassment and me being like, I will wear whatever I want, don’t blame people for what’s happened to them. We can do whatever we want.

If everyone says you’re terrible, ignore them.

Have you had any negative experiences in music due to being a woman?

I did when I was at school. I had a music teacher who seemed to undermine me. I was the only guitarist in the class and I’d constantly ask, can I do this, can I be part of this school gig, can I have a more complicated part because you’ve given me something really easy and I want to expand. He just seemed to shut me down every single time and it knocked my confidence so much because I thought, he thinks I’m not good enough, he’s not even giving me a chance to show him that I can do more than just three chords in a song. I wanted to push myself and I felt like he was holding me back and I couldn’t understand why. I’d watch him give other people chances; they were boys. I’d watch him give a teacher who wasn’t even in music lead guitar parts that I could play. I could have played them if he’d given them to me, so it was really frustrating.

Going back to what you said about Pleaser, to what extent do you think mental health is a particular challenge for your generation?

Lots of people I know suffer with mental health and we talk about it together but the amount of people who have gone and tried to get help is quite low. I feel that there’s almost a shame in going to therapy or going to the doctors. So, we talk about it amongst ourselves but there’s still this shame to deal with it properly. A lot of people feel that they have to deal with it by themselves which is really unhealthy. I don’t feel like there’s pressure not to talk about it but trying to get help is still shunned almost.

Do other young women ever contact you for advice or support?

Yes, I did have this one girl, she was 16. I ended up writing a song for her. She really wanted to start doing music and she wasn’t sure how to and she needed some help with it. I said that I’d help her write a song and recorded some parts for her. That was really cool – I’d never been messaged by anyone like that before, I’d never been asked something like that. It’s something that I really enjoyed. Even though I love song writing for myself, song writing for someone else and seeing them happy with what I’ve done, and helping them do something they love, was really amazing. 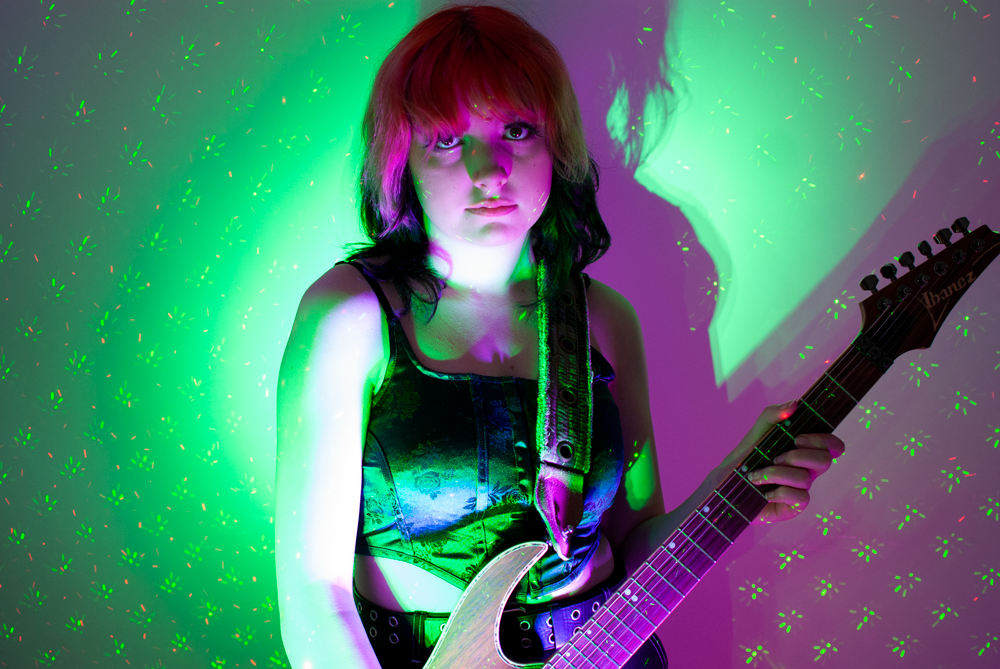 Is music cathartic for you?

Yes, definitely. If I’m feeling any type of way, then I’m just writing or I’m getting my guitar and I’m just playing it out. It’s very therapeutic in a way. If I’m struggling to talk about it, I’ll write it out or I’ll play something and it’s a really good way of expressing those emotions when sometimes I don’t know how to.

Do you find playing live gives you a connection to people?

Yes, I really do love playing live. I’ve missed playing live. I haven’t had many gigs but the ones I have had have been really amazing. Most of the audience have been my friends so they’re all dancing and I’m on stage and it’s an incredible vibe, it’s so cool.

Yes, definitely. Being in a band, there’s a feeling of camaraderie. You’re a team and if you’re unsure of something then you’ve always got someone to fall back on. Doing stuff by myself has been quite difficult at times because when I needed advice, I had to find some people. When you’re with a group of musicians, it’s better because you get a quick response. Everyone’s always honest, everyone’s trying to get the best. Having other people’s ideas is amazing. I can’t think of everything and sometimes someone will say, just change that one note and it will change the whole thing.

Do you think that you will be in a band in the future?

I’d kind of like to have the two because when I’m doing live gigs, I don’t want to perform by myself so I want to form a Pinkfiz band, which would be very cool. Then I can still have that team behind me.

Who is your all-time favourite guitarist and why?

That’s got to be Jimi Hendrix. He is a god. I think he had so much talent. I love watching old videos of him. He’s a genius and he’s got such a distinctive style and tone that I don’t think that anyone will be able to top him.

So, who inspires you as a lead singer?

There’s quite a few. I’m a big fan of Billie Eilish, she’s really cool. I’ve got into Miley Cyrus and her new album. I love Plastic Hearts, I think that’s a great album. Probably Clairo as well. I really like her voice. She’s got quite a soft voice; which a lot of people have said I’ve got as well.

Who would be in the fantasy Pinkfiz group with you?

I’d have to have Joan Jett on guitar. Bassist – I would have Eliana out of Beabadoobee. Drummer – Dave Grohl.

It’s all been very sudden for you, hasn’t it? Unlike many people, you haven’t had years of playing small gigs before getting attention.

It is really weird and it’s kind of scary to think about. Obviously next time I do a live gig, there’s going to be new people there that I don’t know. I’m used to small audiences but hopefully I’ll get some bigger ones now.

Is there anybody around that you’d particularly like to support?

What gigs have you got coming up now that lockdown is easing?

I’ve got a couple of things lined up, but I can’t say too much.

What are your plans for the rest of the year?

I’m planning to do a few music videos and get my YouTube channel up a bit. I’m moving to London this year, which is quite scary, it’s quite a bit thing. I think that we’re looking around the Kingston area. Those are the two big things for me this year. I was going to go to uni in London but it’s not really for me, it’s not actually what I want to do. I’m moving to London with my boyfriend, who is going to uni, and because London has a much bigger music scene than Peterborough. I’ll get more work and more gigs there, and just more opportunities.

How does the song writing process work for you?

I usually just write completely random stuff, just getting everything in my head out. Then I tend to narrow it down a bit more and get rid of some bits. Sometimes it starts with my guitar, because I’m a guitarist first, so often I can just find some chords I like that match the vibe I want to write a song in. If I’d mad or upset, I can translate that into a guitar better than I can with lyrics.

You weren’t born when the Riot Grrrl movement started, how aware are you of the history of feminist music and those bands?

I do try to educate myself on that side of stuff. Obviously, I’m not going to know the full extent because I wasn’t there, but I do watch a lot of videos. I love Bikini Kill. I really love the Riot Grrrl movement, it’s just so inspiring. I mainly watch videos and I’ve read a couple of books as well. I just love the feminist movement and how they do what they want, and I just want to do what I want and not have to worry about being sexualised or being pushed over by men.

The guitar part at the start of Did It Ask? sounds very much like 1980s period The Cure – are they an influence or is it a coincidence?

It’s actually quite coincidental. I like The Cure but I’ve only really listened to Boys Don’t Cry. People say I should like The Cure and that’s so cool but it’s not what I was going for. I’m glad it sounds like that because they’re a really cool band, but I didn’t mean for it to sound like that.

What advice would you give to other would-be Pinkfizes playing in their bedrooms and not knowing how to take it forward?

Just write what you want to. Be yourself is the main thing. Don’t try too hard to copy anyone else, even if you accidentally sound like The Cure! Just go for it. I want to inspire people to do whatever and have the courage to do what they want. So, all the little Pinkfizes should go for it, don’t care about anyone else. If everyone says you’re terrible, ignore them.

Contents of this article are copyright of 1st3 Magazine. It is prohibited to reproduce in whole or in part without prior written permission.