Black Is Back – Jimmie Allen 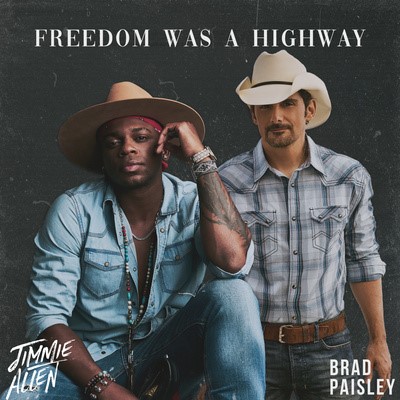 Platinum-selling singer/songwriter Jimmie Allen is back with his latest single “Freedom Was A Highway” with his friend – and Country music superstar – Brad Paisley (LISTEN HERE).

The breezy, windows-down tune impacts US Country radio today, February 1st, and is already receiving international airplay including from Bob Harris on BBC Radio 2 (28/1), describing himself as “a massive fan of Jimmie Allen,” and Baylen Leonard on Country Hits Radio (31/1).

“FREEDOM WAS A HIGHWAY”

On “Freedom Was A Highway,” Allen and Paisley’s vocals pair to reminisce about the nostalgia and simplicity of more carefree, youthful days; the track also features a distinctive Paisley signature guitar solo. The song was co-written by Allen, Ash Bowers and Matt Rogers.

“When I was writing this song with my co-writers, I imagined myself driving down my favorite roads in Delaware. This song takes me back to simpler moments such as an innocent, childhood crush on the next-door neighbor or feeling freedom in the wind as you drive with the windows down. I’ve loved this song from the creation,” Allen says of the track. “I’m a huge admirer of Brad Paisley. I love what he brings to music and I had to have him bring that same magic to this song. I’m humbled to have him join me on this song – he brought the Freedom to the Highway.” “I’m a fan of Jimmie, not only as a musician but also as a person, and I was honored when he asked me to join him on the song. It’s a magical combination – it doesn’t sound like a typical record for me at all and when I come in, I try my best not to ruin Jimmie’s song,” Paisley adds. “I use my guitar to make a record sort of sound like I’m on it even before you hear me sing, and I love this guitar solo. I’m really proud to be a part of ‘Freedom Was A Highway’ and I’m excited for people to hear it.”

“Freedom Was A Highway” was first featured on Allen’s star-studded record Bettie James, which has garnered more than 118 million streams and widespread critical acclaim since its July 2020 release via Stoney Creek Records/BBR Music Group/BMG. NPR calls the project “an announcement of [Allen’s] arrival” and a “huge step for Country” while Billboard hails it “a powerful statement from a developing voice.” Bettie James also landed on several “Best Of 2020” lists, including Rolling Stone, Billboard and Sounds Like Nashville.


Allen ushered in 2021 with a dynamic performance of the song on Dick Clark’s New Year’s Rockin’ Eve with Ryan Seacrest on ABC, reaching more than 8 million households across the USA. He has previously performed the song on NBC’s TODAY and the Tamron Hall Show. Jimmie Allen will host a forthcoming episode of Music Life featuring Mickey Guyton, Abby Anderson, and Twinnie, available as a podcast and on the BBC World Service from 6th February, 2021 – more details here.